So much for ‘defund the police’? Cops beat BLM protesters outside LA Mayor Garcetti’s home (VIDEO) 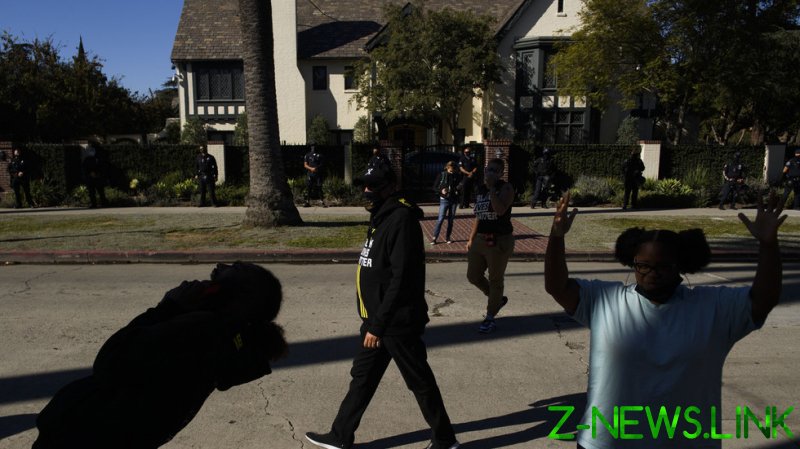 The skirmish erupted during a protest in front of the mayor’s residence organized by BLM. For nearly two weeks, the group has been holding daily demonstrations demanding that Garcetti not be offered a cabinet position, if Joe Biden is confirmed as president-elect. The activists say that Garcetti’s poor handling of transportation and homelessness in the city should exclude him from any job in Washington DC.

According to BLM-LA, protesters had peacefully assembled near Garcetti’s mansion on Sunday morning when officers “advanced without warning and violently attacked” them.

A spokesperson for the Los Angeles Police Department told local media that the cops engaged in “crowd management” after spotting an individual unlawfully using a bullhorn and attempted to make an arrest.

Footage of the fracas shows police in riot gear swinging their batons at demonstrators as shouts and screams come from the crowd. Several protesters are seen trying to block the blows as they scuffle with the cops, resulting in some people being pushed to the ground.

The officers eventually declared an unlawful assembly and made one arrest.

A leader of the racial justice group claimed that at least two protesters were hospitalized, with one person having their teeth knocked out during the clashes.

Amid the violent skirmish, critics recalled with irony the Garcetti’s self-proclaimed solidarity with BLM. The LA mayor had attended a large march back in June, and pushed through a $150 million budget cut to the LAPD. However, he resisted calls from ‘Defund the Police’ activists to slash the city’s police budget by 90 percent.

Garcetti has become a target for activists from across the political spectrum. A group of demonstrators angry over his Covid-19 restrictions gathered outside the mayor’s home later on Sunday.