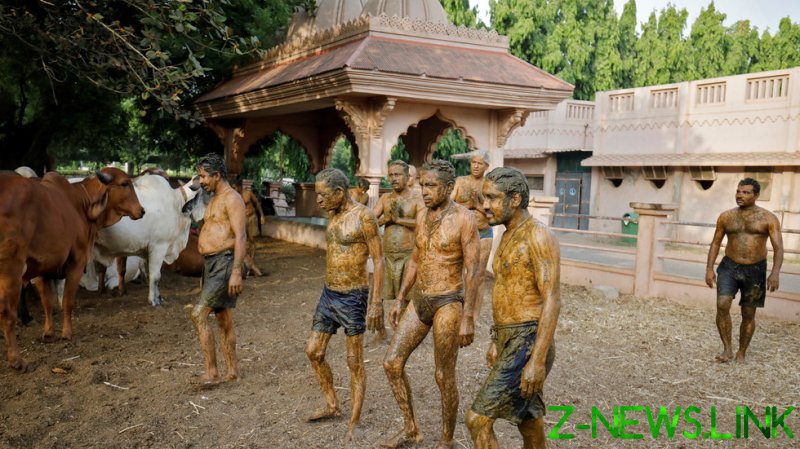 On Tuesday, India’s seven-day average case count for Covid-19 reached a record high of 390,995 as the World Health Organization labeled the Indian strain of the virus a “variant of concern.”

With hospitals already at breaking point and oxygen supplies being rationed, doctors have reiterated their warning against alternative treatments and preventative measures which have become popular across India.

The practice of applying a cow dung and urine mixture to one’s skin and waiting for it to dry, before washing it off with milk or buttermilk, is particularly concerning to doctors.

“There is no concrete scientific evidence that cow dung or urine work to boost immunity against Covid-19, it is based entirely on belief,” Dr JA Jayalal, national president at the Indian Medical Association, told Reuters on Tuesday.

“There are also health risks involved in smearing or consuming these products – other diseases can spread from the animal to humans,” he added.

Those involved in the ritual either hug or honor the cows while the pack is drying, and even practice yoga in their presence to boost energy levels.

Gautam Manilal Borisa, an associate manager at a pharmaceuticals company, told Reuters that the practice helped him recover from Covid-19 last year. “We see … even doctors come here. Their belief is that this therapy improves their immunity and they can go and tend to patients with no fear.”

For Hindus, who form around 80% of India’s 1.3 billion population, the cow is a sacred animal and has been incorporated into several religious rituals. It is believed that the cow is representative of divine and natural beneficence. Cow’s dung is even used to clean homes and in prayer rituals.

In March and April, millions of Hindus descended on Haridwar and the Ganges river where the Kumbh Mela pilgrimage was being observed. Thousands of Covid-19 cases were recorded as millions of pilgrims travelled to the city to take a dip in the holy river.

According to the health ministry, there were a further 329,942 on Tuesday. Deaths from the disease rose by 3,876.