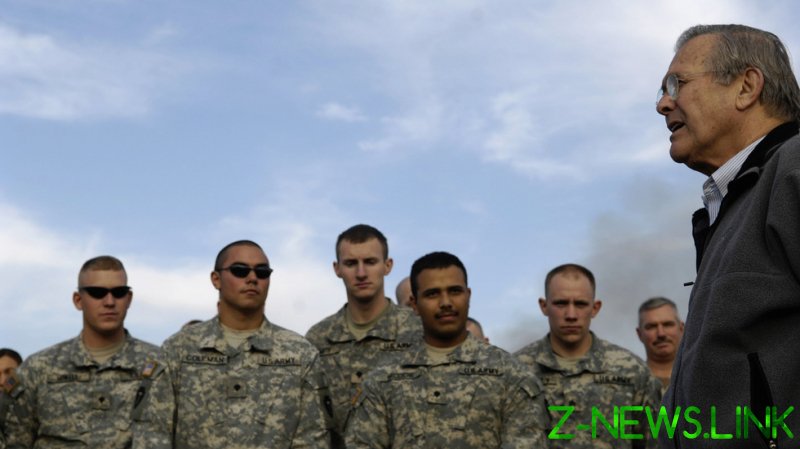 On June 29, Donald Rumsfeld, the secretary of defense for Presidents Gerald Ford and George W. Bush, and one of the main architects of the US invasion of Iraq, died at the age of 88. He will be remembered mostly for the catastrophic consequences of that invasion.

The goal of the American military intervention was not just to eliminate “the threat of the Iraqi weapons of mass destruction” – none of which were found after the occupation of Iraq – but to change Iraq into a modern secular state that would contain the influence of Iran. As a result, however, Iran only gained more influence in Iraq, Islamic fundamentalism saw a rise, many Christians left the country, women were pushed out of public life, and ISIS emerged out of the mess in Iraq.

What were the roots of such a colossal misjudgment? Here, enter philosophy.

What he forgot to add was the crucial fourth term: the “unknown knowns,” things we don’t know that we know – which is precisely the Freudian unconscious, the “knowledge which doesn’t know itself,” as Lacan used to say. If Rumsfeld thought that the main dangers in the confrontation with Iraq were the “unknown unknowns,” the threats from Saddam we were not even aware of, our reply should be that the main dangers were, on the contrary, the “unknown knowns,” the disavowed beliefs and suppositions we were not even aware of adhering to ourselves.

This distinction between unknown unknowns and unknown knowns is today more pertinent than ever.

In the case of ecology, disavowed beliefs and suppositions are the ones which prevent us from taking seriously the prospect of a catastrophe. And we cannot even understand the common reaction to the ongoing pandemic without the help of Rumsfeld’s epistemology.

Back in April 2020, reacting to the Covid-19 outbreak, prominent German philosopher and sociologist Jurgen Habermas pointed out that “existential insecurity is now spreading globally and simultaneously, in the minds of media-connected individuals themselves.” He wrote: “There has never been so much knowledge about our not knowing and about the compulsion to act and live under uncertainty.”

And he was right to claim that this “not knowing” concerns not only the pandemic itself – we at least have experts there – but even more so its economic, social, and mental consequences. Note his precise formulation: it is not simply that we don’t know what goes on, but that we know that we don’t know, and this not knowing is itself a social fact, inscribed into the ways our institutions act.

We now know that in, say, medieval times or early modernity people knew much less, but they didn’t know this, because they relied on some stable ideological foundation which guaranteed that our universe is a meaningful totality. The same holds for some visions of communism, even for Francis Fukuyama’s idea of the end of history – they all assumed to know where history was moving.

Habermas was also right to pinpoint the uncertainty in “the minds of media-connected individuals.” Our link to the wired universe tremendously expands our knowledge, but at the same time it throws us into radical uncertainty (Have we been hacked? Who controls our access? Do we read fake news?). The ongoing allegations about foreign hacking of US government institutions and big companies exemplify this uncertainty: Americans are now discovering that they cannot even determine the scope and methods of the hacking taking place. For the US, the viral threat is not only a biological one, but also digital.

It is no secret what needs to be done. First, we should finally recognize the pandemic crisis for what it is: part of a global crisis for our entire way of life, from ecology to new social tensions. Second, we should establish social control and regulation over the economy. Third, we should rely on science, but without simply accepting it as the agent of decision-making. To explain why, let’s return to Habermas: our predicament is that we are compelled to act while knowing that we don’t know the full coordinates of the situation we are in, and non-acting would itself function as an act. But is this not the basic situation of every action? Our great advantage is that we know how much we don’t know, and this knowing about our not knowing opens up a space of freedom. We act when we don’t know the whole situation, but this is not simply our limitation. What gives us freedom is that the situation – in our social sphere, at least – is in itself open, not fully (pre)determined.

We should read Habermas’ claim that we have never had so much knowledge about not knowing through Rumsfeld’s categories: the pandemic shook what we (thought we) knew that we knew; it made us aware of what we didn’t know that we didn’t know; and, in the way we confronted it, we relied on what we didn’t know that we know (all our presumptions and prejudices that determine our actions even though we are not aware of them). We are not dealing here with the simple passage from not knowing to knowing, but with the much more subtle passage from not knowing to knowing what we don’t know – our positive knowing remains the same in this passage, but we gain a free space for action.

It is with regard to what we don’t know that we know, our presumptions and prejudices, that the approach of China (and Taiwan and Vietnam) to the pandemic was so much better than that of Europe and the United States. I am getting tired of the eternally repeated claim, “Yes, the Chinese contained the virus, but at what price?”

While only a whistleblower can tell us the whole story of what really went on there, the fact is that when the virus broke out in Wuhan, the authorities imposed a lockdown and halted the majority of production across the country, clearly prioritizing human lives over the economy. This happened with some delay, true, but they took the crisis extremely seriously. Now they are reaping the rewards, including economically. And – let’s be clear – this was only possible because the Communist Party is still able to control and regulate the economy: there is social control over market mechanisms, albeit a ‘totalitarian’ control. The pandemic is not just a viral process; it is a process that takes place within certain economic, social, and ideological coordinates that are open to change.

According to the theory of complex systems, such systems have two opposite features: robust stable character and extreme vulnerability. These systems can accommodate great disturbances, integrate them, and find new balance and stability – up to a certain threshold (a ‘tipping point’), above which a small disturbance can cause a total catastrophe and lead to the establishment of a totally different order. For many centuries, humanity did not have to worry about the impact on the environment of its productive activity – nature was able to accommodate deforestation, the use of coal and oil, etc.

However, it seems that today we are approaching a tipping point – one really cannot be sure, since such points can only be clearly perceived once it is already too late. So we encounter a dilemma apropos of the urgency to do something about today’s threat of different ecological catastrophes: either we take this threat seriously and decide today to do things which, if the catastrophe does not occur, will appear ridiculous; or we do nothing and lose everything in the case of the catastrophe. The worst case is the choice of a middle ground, of taking a limited amount of measures – in this case, we will fail whatever happens.

That is to say, the problem is that there is no middle ground with regard to the ecological catastrophe: either it will occur or it will not occur. In such a situation, talk of anticipation, precaution, and risk control tends to become meaningless, since we are dealing with the “unknown unknowns”: we not only do not know where the tipping point is, we do not know exactly what we do not know.

The most unsettling aspect of the ecological crisis concerns the so-called “knowledge in the real” which can run amok: when winter is too warm, plants and animals misread the hot weather in February as the signal that spring has already begun and start to behave accordingly, thus not only rendering themselves vulnerable to late onslaughts of cold, but also perturbing the entire rhythm of natural reproduction. This is how one should imagine a possible catastrophe: a small-level interruption with devastating global consequences.

So, to conclude, since we should respectfully follow the old Latin motto “De mortuis nihil nisi bonum” (“Of the dead, [say] nothing but good”), we should ignore all the catastrophic decisions of Donald Rumsfeld and remember him as an amateur philosopher who introduced some distinctions which are useful for analyzing our current predicament.