SJWs hail Marvel’s new ‘Filipina Captain America’, but her name has raised eyebrows… as it can mean ‘HEROIC GENITALS’ 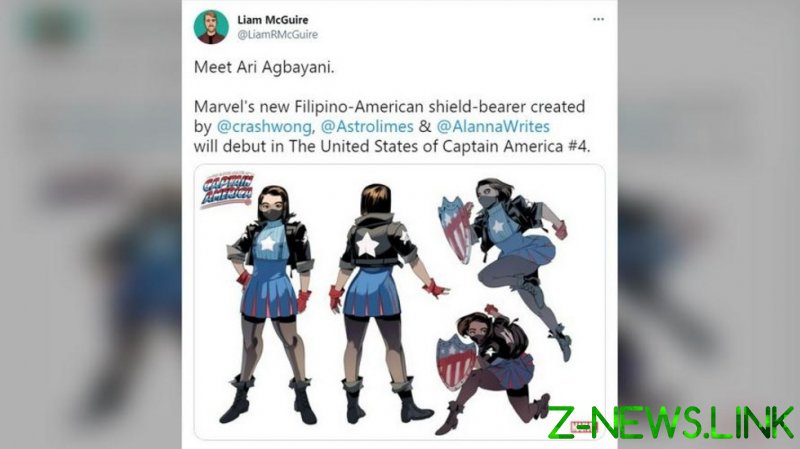 Ari Agbayani, who was proudly presented to comic books fans last week, is to show up in the September issue of ‘United States of Captain America’. Rather than taking the famous superhero identity for herself, she is one of several local heroes inspired by the example of the original Cap to don the stars and stripes and fight for justice. Agbayani is a Filipino-American college student and is part of “a diverse cast of new heroes” showcased in the “groundbreaking series,” Marvel Comics said.

Her name, however, has left some people familiar with her region of origin scratching their heads. One of the meanings of the word ‘ari’ in the Tagalog language is ‘genitals’. The surname Agbayani in the Ilocano language stands for ‘being heroic’. Tagalog and Ilocano are among the most widely spoken native languages in the Philippines, with the former serving as the basis for the country’s standardized ‘national language’ Filipino.

Inevitably, some people assumed that the new hero’s name was a tongue-in-cheek joke that bosses at Marvel Comics failed to see through. And an avalanche of crude gags followed – not necessarily directed at the creators of Agbayani.

The backlash was big enough for co-creator Alyssa Wong to address it. Wong, who is of mixed Chinese and Filipino ancestry, said Ari was actually short for Arielle and that it was a perfectly fine nickname for a Filipina. “As a Fil Am kid who didn’t see many characters like me, I’m glad that’s changing,” she added.

Of course, it’s not that uncommon for nicknames to double as unprintable slang terms, even in English. DC’s Dick Grayson, the hero best known as Batman’s sidekick who later went on to forge a solo crime-fighting path as Nightwing, may be the most famous example.

The name of the ‘Filipina Cap’ would probably not have triggered such a strong response if representation and diversity were not at the forefront of the series she has been created for. Marvel’s pandering to the woke agenda with characters like Snowflake and Safespace, for instance, does not exactly translate into big sales numbers, and may lead the series straight into a memory hole.

Readers are yet to judge the artistic merits of the “ultimate Captain America team-up,” as Marvel Comics have described it, but one can see why some are deeply skeptical.