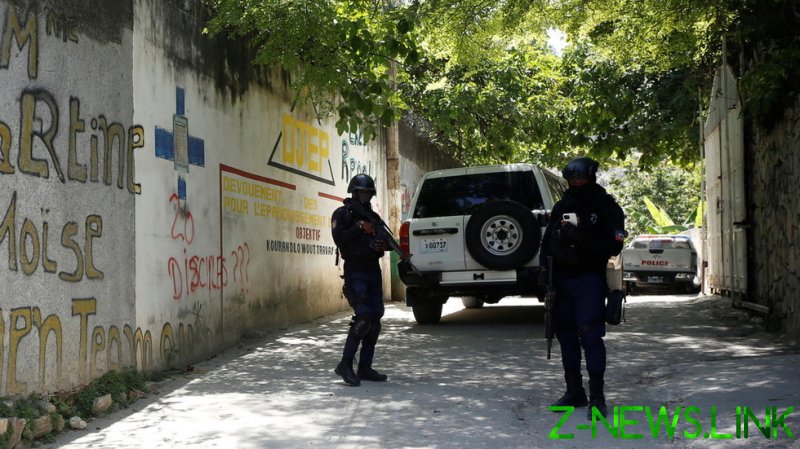 Officers have killed a total of seven people in connection with Moise’s death and are searching for those who masterminded the assassination, National Police Director Leon Charles told a news briefing on Thursday.

Moise was gunned down at his home in the hills above the capital Port-au-Prince early on Wednesday morning, in an attack that also seriously wounded his wife Martine.

Helen La Lime, the UN Special Envoy for Haiti, said on Thursday that Prime Minister Claude Joseph would lead the Caribbean country until the next elections, which, he promised her, will go ahead later this year.

Two of the new suspects were turned over to police after being roughed up by angry locals, who said they saw the men hiding in nearby bushes.

A US citizen is apparently among the six people detained, the Washington Post reported on Thursday.

The paper said Haiti’s elections and inter-party relations minister Mathias Pierre had told it that another of those arrested is believed to be a Haitian American.

Police said on Wednesday they had killed a group of four people involved in Jovenel’s assassination and had arrested another two people in connection with his death.

Charles said three police officers had been taken hostage but were later released. He vowed that any remaining attackers on the loose would be “killed or arrested.”

Bocchit Edmond, Haiti’s ambassador to the US, said the men who shot Moise dead were “foreign mercenaries and professional killers.”

Meanwhile, Joseph said Moise’s killers were “foreigners who spoke English and Spanish” who had gone undercover as US Drug Enforcement Agency agents.

On Thursday, the interim PM urged his fellow Haitians not to kill any suspects, but to work with the authorities and turn them over to the police.

In response to Moise’s assassination, he has declared a 14-day “state of siege,” which includes imposing martial law and sealing Haiti’s borders.

The president’s death has deepened Haiti’s existing political crisis. Earlier this year he had faced protests after he made it clear he would not leave office.

Legal experts and campaign groups said his five-year term ended on February 7, but Moise said he was not due to depart until next year.