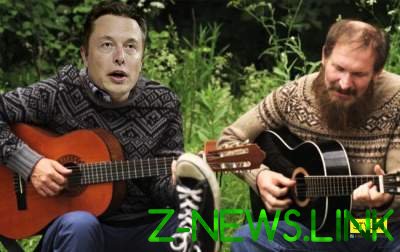 A video posted by businessman, is gaining popularity on the Internet

Famous American entrepreneur, the founder of Tesla and SpaceX Elon Musk has published a video in which, sitting around the campfire, singing a song johnny cash and traditional roasts marshmallows. The corresponding video appeared on Insragram account of a billionaire.

Apparently, the action takes place on the roof of the Gigafactory – a huge factory in Nevada, which produced batteries for cars Tesla.

For a matter of hours the video Mask looked more than one million users.

By the way, users are not asleep, and have started to do parodies of “gatherings” of the businessman.

In particular, the channel S A M O S A B O Y there were three of Kobe. On one of Elon Musk roast marshmallows and drink alcoholic beverage, “singing” this song “And I’m not a Moskal” from the repertoire of Oresta Fierce.

“Nanoscale Musk, bacon and Mead”, – said the Kobe one user.

In another video, the founder of Tesla “sings” the lines of the legendary Soviet hit.

“It’s great that we all gathered here today,” says Musk.

Also, the author has published Kobe, where a gay Mask “sings” the song of Verka Serduchka “Husnock”.