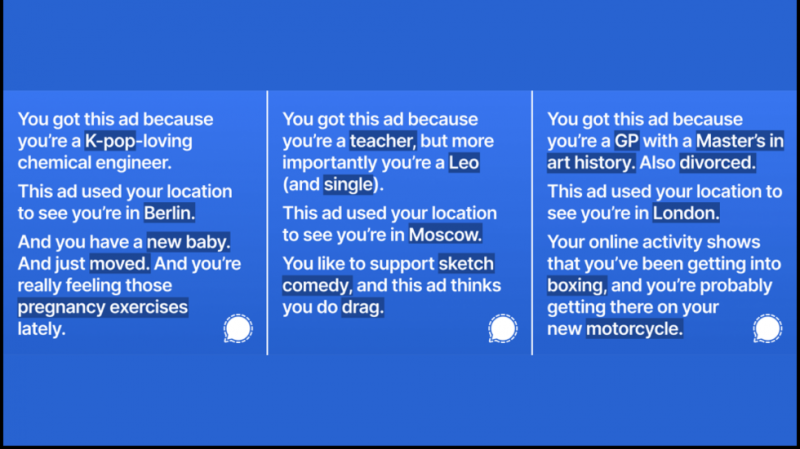 In a blog post published on Tuesday, Signal, which brands itself as privacy-positive, called out the user privacy policies of both Instagram and its parent company Facebook, both of which use the same adtech tools and platform.

As a result, both have access to all the data users create when looking through their Instagram and Facebook feeds. In addition to personal information such as age and location, the data collected can be as granular as type of employment, relationship status, real estate opportunities – even skincare routine and music interests.

“It’s already possible to catch fragments of these truths in the ads you’re shown; they are glimmers that reflect the world of a surveilling stranger who knows you,” according to Jun Harada, head of growth and communication at Signal, to whom the blog post is attributed.

Using such refined data points, Signal – which competes with Facebook-owned WhatsApp – created a “multi-variant targeted ad” campaign to show how social media giants such as Facebook use their platforms to “sell visibility into people and their lives.”

“This isn’t exactly a secret, but the full picture is hazy to most – dimly concealed within complex, opaquely rendered systems and fine print designed to be scrolled past,” the post noted.

The ads contain three generic sentences of text, parts of which were highlighted as variable, depending on the specific attributes of the target viewer or audience Signal picked using information offered by Instagram’s adtech tools.

For instance, one ad read, “You got this ad because you’re a ‘newlywed Pilates instructor’ and you’re ‘cartoon crazy’. This ad used your location to see you’re in ‘La Jolla’. You’re into ‘parenting blogs’ and thinking about ‘LGBTQ adoption’.”

The parts in single quotes are the variable information highlighted in the ads to show the extent of information being collected and available for advertisers to use.

“The ad would simply display some of the information collected about the viewer which the advertising platform uses. Facebook was not into that idea,” notes the blog post, which features a screenshot of Signal’s ad account being listed as disabled.

“Being transparent about how ads use people’s data is apparently enough to get banned; in Facebook’s world, the only acceptable usage is to hide what you’re doing from your audience,” the post concluded, noting that Signal’s ad account had been shut down before many of these ads reached their target audiences.

This was not the first time Signal has tangled with Facebook. After WhatsApp announced a change in its policy terms earlier this year, there was an uptick in users opting for alternatives such as Signal and Telegram. Under the new terms of service – which are due to take effect on May 15, WhatsApp can share user profile data with Facebook in certain circumstances.

At the time, Facebook had run ads for its Messenger app whenever iPhone users searched the App Store for Signal.

In response, Signal tweeted: “Facebook is probably more comfortable selling ads than buying them, but they’ll do what they have to do in order to be the top result when some people search for ‘Signal’ in the App Store. P.S. There will never be ads in Signal, because your data belongs in your hands not ours.”