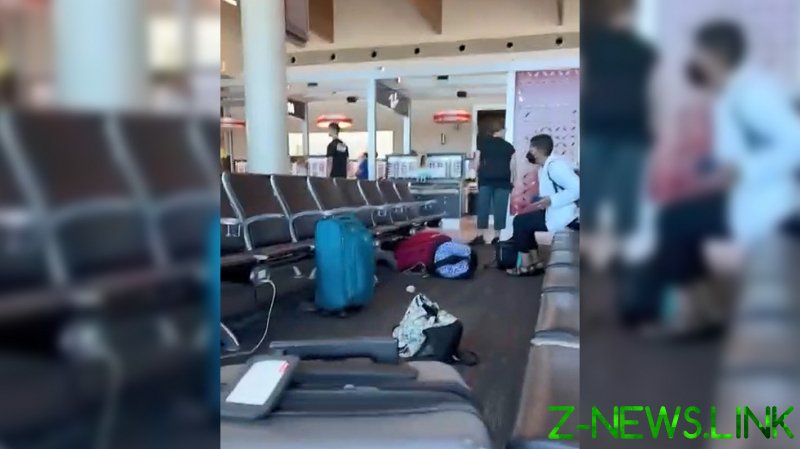 Dallas Love Field (DAL) airport in the US state of Texas halted all flights and locked down a terminal on Monday, after a female suspect reportedly fired shorts into the air at a ticketing counter. Video shared on social media showed passengers cowering behind seats.

The Federal Aviation Administration (FAA) ordered a ground stop at DAL shortly after 11am local time, “due to security.” By 11:30am, Dallas police had responded to reports of shots fired inside the terminal. Officials said one person was taken to a hospital after an “officer-involved shooting” and that the terminal has been secured, local TV outlet WFAA reported.

The suspect, described only as female, reportedly fired one or more shots into the air at a ticket counter, sending other passengers scurrying for cover. She was then shot by the responding officers, according to multiple reports.

One video making the rounds on Twitter showed passengers sitting on the floor of a waiting area and seeking cover behind seats.

Another showed a group of passengers waiting outside the building, leaning against the wall in midsummer heat. The impromptu evacuation was organized by Transportation Security Administration (TSA) staff.

Dallas PD Chief Eddie Garcia told reporters that a 37-year-old woman went into an airport bathroom, changed into a hoodie, then approached the ticket counter and fired several shots into the ceiling. At that point, a Dallas PD officer shot her. No one else was injured in the incident.

Police declared the terminal “secure” at noon local time, but the ground stop is expected to remain in effect at least until 1:30 pm. There was a heavy police presence at the airport, as the investigation got underway.