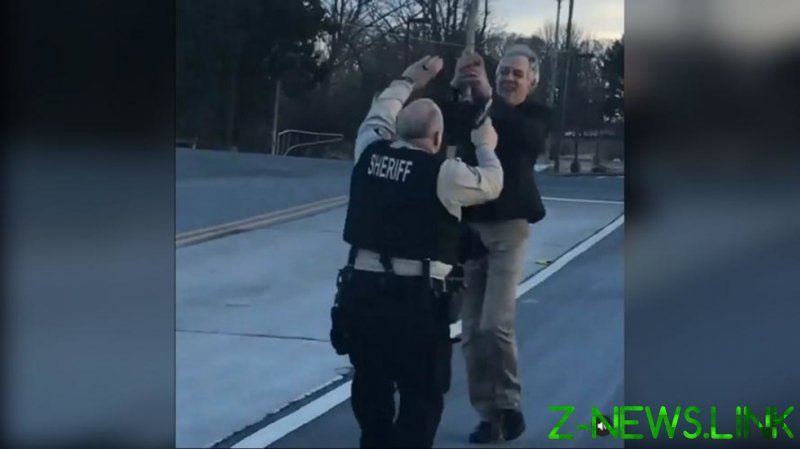 The fatal shooting happened near the town of Laytonsville in Montgomery County on Saturday morning, according to a police account of the events. The man that ended up being killed was driving erratically on the road to Olney, running one car off the road and into a telephone pole, and colliding with another vehicle before coming to a stop.

“He immediately got out of the car with a very large wooden stick of some sort with a very large piece of wood,” Sheriff Darren Popkin told the media. “He started going after the vehicle that he had just ran into.”

At about that time, the deputy sheriff arrived at the scene, and the last seconds of his confrontation with the person was filmed by a driver. The disturbing footage shows him coming at the officer with a stick and taking a swing at him, breaking it against his left arm and tossing the remaining piece at him.

The deputy sheriff then opens fire at the chest of the assailant, who takes at least 12 shots at point blank range. The man collapses on the road, with blood visible on his clothes and lips.

The person filming the incident can be heard saying the man is “about to get smoked” at the beginning and then repeatedly shouts out to the deputy sheriff: “man, shoot his ass!” When the deputy finally does, the person seems genuinely surprised by the outcome, exclaiming: “Damn! Oh, S**t!” He apparently gets over the shock and says, “That’s what his ass gets! That’s the s**t I like to see!”

The shooting victim was a white male who appears to have been in his late 40s. A longer version of the video that is not available on the account anymore includes several more seconds of the footage, in which the person filming says: “Thought his ass was privileged.”

The police said after the encounter that the deputy sheriff was taken to the hospital with a superficial arm injury and back pain. He is expected to be released on Sunday and will be placed on administrative leave while the incident is being investigated. The shooting victim was pronounced dead at the scene. Neither was immediately identified.

Before the shooting, the deputy tried to use his taser to subdue the erratic driver, according to the Montgomery County Police Department, but was not successful for reasons not immediately determined.