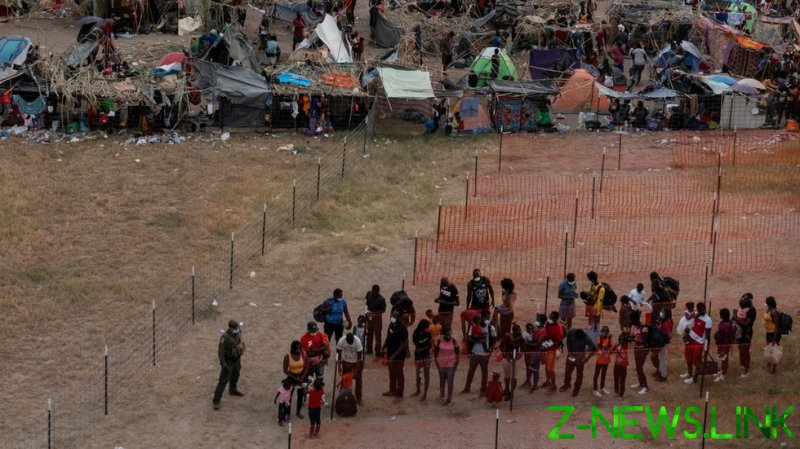 As Biden begins the mass expulsion of Haitian refugees – around 14,000 of whom have showed up under a bridge in the Texas border town of Del Rio in recent weeks, many fleeing natural disaster and political turmoil in their home country – members of his own party have rejected the decision as cruel, among them the Senate’s top Democrat.

“The horrible treatment of these innocent Haitian people – who have come to the border fleeing violence and natural disaster – must stop immediately,” Schumer said in a tweet, adding that Biden “must stop these expulsions and end this Title 42 policy at our southern border.”

To justify the deportations, Biden invoked a provision of US federal law (Title 42 of the United States Code) that allows the government to expel “entries and imports from designated places to prevent [the] spread of communicable diseases.” Title 42 expulsions were used heavily under the Donald Trump administration, which cited the Covid-19 pandemic to bar entry to large numbers of migrants. Despite repeated vows to overturn Trump’s immigration policies, Biden is now using the same mechanism to deport thousands of Haitians.

Schumer echoed earlier criticism from Senator Cory Booker (D-New Jersey) of the government’s “unconscionable” treatment of the refugees, while Congressman Adam Schiff (D-California) and Julian Castro, who served as Housing and Urban Development Secretary under the Barack Obama administration, also denounced the move.

Opposition from Democrats grew more vocal after images from a US-Mexico border crossing made the rounds online, showing Border Patrol agents on horseback forcefully rounding up what appeared to be Haitian migrants. While the agents’ reins were mistaken for “whips” by some critics, the tense visuals nonetheless helped to galvanize criticism from within Biden’s own party.

“The summary, mass expulsions of individuals currently underway under the Title 42 authority, without screening for protection needs, is inconsistent with international norms and may constitute refoulement,” he said, referring to a concept under international humanitarian law that forbids states from returning asylum-seekers to places they are likely to face danger or persecution.

Grandi also cited “deplorable conditions” under the Del Rio bridge, an all-concrete overpass located along a stretch of the US-Mexico border where a massive number of migrants has gathered. While federal authorities temporarily banned drone flights in the area last week after aerial footage showed the vast scale of the migrant encampment, state officials have since helped local news crews to circumvent the restrictions, flying Fox reporters over the scene in their own helicopters to give them a better look.

The Texas state government has long been at loggerheads with the Biden administration over border policy, with Governor Greg Abbott moving to shut down several crossings into the US last week while blaming Biden for “sheer negligence” in failing to “secure the border.”

The deportation effort has so far been a messy one in both the US and Haiti, with footage emerging from an airport in the Haitian capital on Tuesday purporting to show newly returned refugees storming an airstrip, some seen throwing shoes at a plane. One day earlier, a group of Haitian migrants reportedly attempted an escape from a Border Patrol bus en route to a processing center in Brownsville, Texas, though all were soon recaptured.

While the US Department of Homeland Security vowed to accelerate deportation flights over the weekend, Mexico has also offered a hand in busing and flying Haitian migrants away from the US border, some being brought closer to the Mexico-Guatemala border far in the country’s south. Mexico’s Foreign Relations Secretary Ebrard claimed that many of the Haitians already have refugee status in other states such as Chile and Brazil, though another official told the Associated Press that some are seeking to remain in Mexico and would be brought to the southern city of Tapachula to await immigration proceedings.