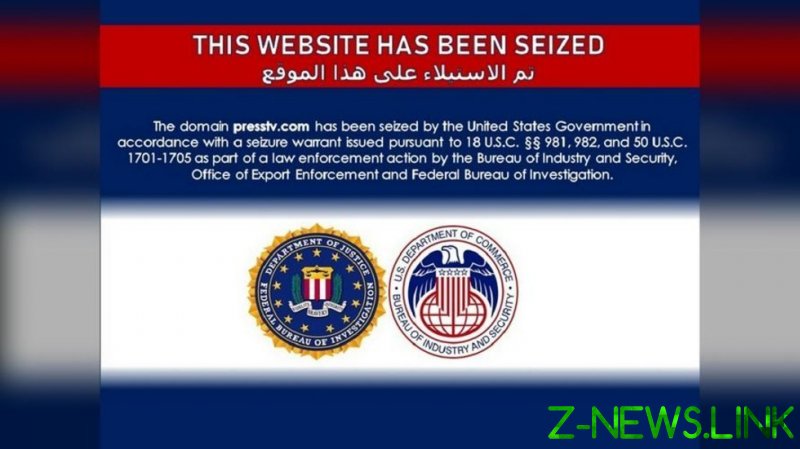 There were those who thought a new US presidency would mean a reset in America’s relations with Iran after the catastrophe of the Trump era. But clearly that’s not the case.

Talks between Washington and Tehran over returning to the terms of the Joint Comprehensive Plan of Action (JCPOA) nuclear deal hinted that some progress may be made. But on Tuesday night, the FBI seized the website of Iran’s international broadcaster Press TV, as well as several other Iranian news outlets, and replaced their content with a message that effectively stated it had done so via a court order as they were “subvert[ing] democratic processes” in the US.

Only a few days ago, Iran elected a new hardline president, Ebrahim Raisi, who has already vowed never to meet Joe Biden.

It is, of course, deeply ironic that a country which claims to champion freedom of speech has taken these websites down. But it’s merely the latest act in a long list of crimes and acts of aggression committed against Iran by Washington dating back decades.

Once again, Biden is proving himself to be no different from other presidents in how Tehran is dealt with. And despite offering dialogue, he seemingly has no intention to apologize for Trump’s odious legacy.

Washington has long framed Iran to be a state sponsor of terrorism and a rogue actor, but when one looks at the historical record, it is often America that has been the aggressor.

How would you feel, for example, if a foreign country meddled in your democratic elections and overthrew an elected leader in favor of an autocrat puppet? Or backed a foreign invasion against you, shot down a civilian airliner and stated they would never apologize? Or agreed a legally binding treaty with you and then reneged on it because they decided they didn’t like the terms, seized your oil by force and then resold it  and to top it all off, assassinated one of your most senior politicians?

The US has done all this and more to Iran, and has never been held accountable for any of it.

It is not because of religious zealotry, as is often caricatured, that Iran is such a fervently anti-American state. The hostility can be attributed to a history in which the US has constantly sought to dominate the country politically in an attempt to control its oil reserves. The long list of aggressions has caused mutual suspicion and ideological hatred.

This has played out across a series of proxy conflicts which have engulfed the Middle East, from Lebanon to Syria and Yemen. It is easy for the US to write off Iran as a rogue actor, but perhaps more soul-searching is required to recognize how American actions have contributed to such toxicity.

As the seizure of the websites demonstrates, the Biden administration does not appear to be offering any reprieve. While it may present itself as being morally superior to Trump, in practice its actions are little different.

The focus on Trump’s own behavior and personality distracted us from the fact his actions were typical of US statecraft abroad, and this week has shown that the bullying and coercion of Iran will continue unabated.

Biden might want to engage in dialogue with Tehran. But so far, all the indications point toward adopting the same policy as Trump that the US should not return to the JCPOA and lift the sanctions unless the goalposts shift and Iran agrees to more extensive, one-sided terms.

The treaty is no longer simply about Iran’s nuclear ambitions, but a more all-encompassing effort to contain its ballistic missile program too. However, attempting to acquire more leverage by seizing Iranian news websites is a strategic mistake, especially given that support in Iran is shifting toward hardliners.

Yes, Tehran wants sanctions relief, so one should not write off some kind of potential agreement especially given it has its uranium enrichment to barter. But it will not capitulate to every US demand, and there is no chance of a détente in relations being ushered in. Raisi has made that very clear.

Iran is well aware that Washington will not keep its promises and that the adversarial relationship will continue. It also knows the only feasible way out of US containment is to move beyond the dollar and to tilt its economy toward other powers such as Russia and China. With Biden yet to demonstrate any new reasons for the US to be trusted, there are few good reasons to believe that a comprehensive reset in relations will come anytime soon.