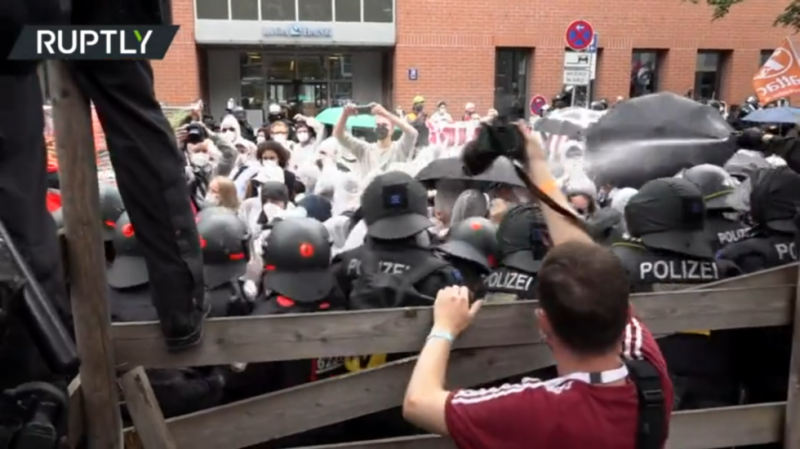 Thousands of activists marched through the streets of Munich on Saturday to protest the ongoing IAA Mobility show. The event used to be called the Frankfurt International Motor Show, before it was moved to the southern German city and rebranded to include more eco-friendly modes of transportation like bikes.

The protests held under the umbrella of the #aussteigen movement went off mostly peacefully, though in some cases the police restricted movement of the activists. But the situation in Luisenstrasse outside the IAA open space booths escalated when officers clashed with a group of demonstrators, after some of them climbed trees to hang a banner between them.

During the altercation, police used batons and pepper spray against the protesters. Injuries were reported on both sides, with one tree-climber reportedly hitting their head hard on the ground after being dragged down by officers. Police spokesman Andreas Franken said that law enforcement would not have intervened if they knew it was only about the banner.

The use of force was criticized by Georg Kurz, a spokesman for the Green Party’s youth organization. He said it exemplified the different treatment that the German authorities offer to those who “destroy climate” and those who want to save it.

IAA Mobility seeks to showcase the German auto industry’s new more climate-friendly approach, with the introduction of electric cars and electric bikes, better recyclability of their vehicles and other innovations. It’s the first major car show in Europe in two years, held as the continent attempts to emerge from Covid-19 restrictions.

Eco-activists distrust the rebranding of the show, which has been held in Frankfurt since 1951. Organizers last year decided to move it to Munich – the city that automaker BMW calls its home and in which the Greens hold the largest number of seats in the city council. Activists believe this to be simple ‘greenwashing’, an attempt to whitewash the reputation of the automobile industry with environmental promises and to stall a radical reform of transportation.