Scientists have discovered the most distant comet. Video 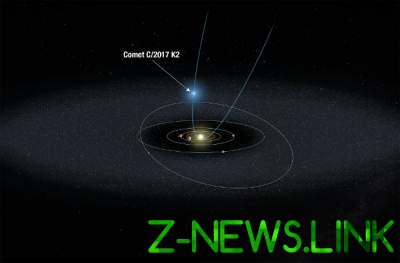 At the moment it’s distance record.

Astronomers have spotted a record of a distant comet.

Space telescope “Hubble” photographed the most distant active comet C/2017 K2 within the Solar system at a distance of 2.4 billion kilometres from the Sun.

“In the next five years, the comet will continue on its journey to the inner reaches of the Solar system. The smallest distance from the sun, it will reach in 2022, approaching to a closer distance than the orbit of Mars. The first time we will be able to trace the development of the activity of the comet, held such a vast distance of the Oort cloud. She will become only more visible as you get closer to the Sun,” said the authors.

Note that according to scientists, the comet is farther than the orbit of Saturn.