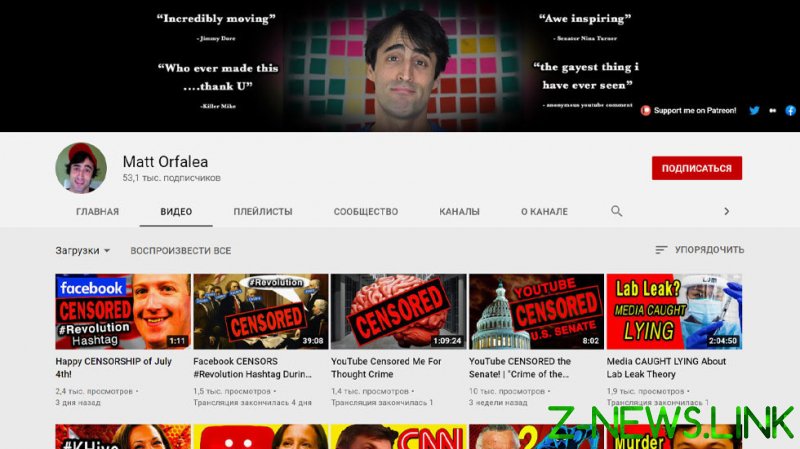 Orfalea is a leftist video content creator best known for his inspiring viral 2019 video blasting mainstream media for its skewed coverage of the Bernie Sanders presidential campaign. His YouTube channel has over 53,000 subscribers interested in his anti-establishment political commentary.

Lately, however, the platform seems to have ratcheted up scrutiny of his content. This week it received its latest strike and was demonetized over violating policy on “violent criminal organizations,” a puzzled Orfalea announced on Twitter.

The video flagged by the service as in breach of its rules, he explained, was an old satirical fake Starbucks ad, which labeled its products “insanely overpriced beverages for psychopaths.”

YouTube’s support seems to have gotten to the bottom of it and agreed that satirizing consumerism and promoting organized crime are two different things, tweeting that the video was removed “in error” and that the site had “resolved the strike and re-enabled your monetization.”

However, judging by Orfalea’s reaction, the Google-owned company didn’t bother to reverse the demonetization on all the rest of his videos.

Orfalea’s previous strike from YouTube came several weeks ago and was arguably just as odd, as detailed by him on Medium. He was one of the people who got punished by the website’s overeager censorship algorithms taking aim against a drug called ivermectin.

Other targets included Senator Ron Johnson and the C-SPAN broadcast from the US Senate, where the drug’s possible use to treat Covid-19 was discussed.

Orfalea, a vocal critic of US Big Tech’s overbearing power, made a video criticizing YouTube for its censorship and slammed its “authoritarian control over important topics of discourse” on Medium. The platform took issue with his video, or more precisely with private-only raw footage that he uploaded as part of the editing process. He deleted them after a warning and before getting a strike for them, he said.

Getting burned over videos he produced years ago is a recurring theme for Orfalea. His five minutes of fame in 2019 ended hours after the Sanders campaign offered him a spot, after journalists dug through his old content and discovered a decade-old manipulated record of Martin Luther King’s ‘I have a dream’ speech, turned into a lewd confession.

Orfalea responded by saying that while his old work was meant to show how easily media can be altered to misrepresent a person, it was a piece of “vulgar comedy” and that he understood why some people could find it offensive.