Home / WORLD / Satanic or satire? US school preaches ‘cannibalism,’ yet concerned parents are the ones branded as ‘domestic terrorists’

Satanic or satire? US school preaches ‘cannibalism,’ yet concerned parents are the ones branded as ‘domestic terrorists’ 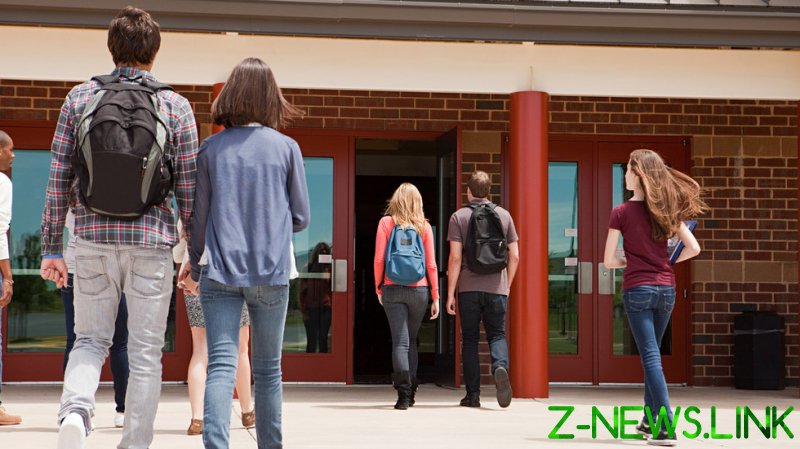 In the ongoing series entitled ‘US Schools Go Insane,’ one institution apparently thought that by slapping a ‘satire’ sticker on the most profane idea imaginable, the contraband would go unnoticed. On behalf of satire, I’m happy to report it didn’t work.

As part of the inventive English lesson, which probably spoiled more than one trip to the cafeteria, high school students at Richmond Hill were tasked with finding ways of ‘raising and eating of babies to solve the world hunger problem’. Yum. Rhonda Thomas, founder and president of Truth in Education, broke down the details of the class assignment in a shocking interview with The New American. The information from the lesson plan that she divulged is nothing short of – as Thomas herself described it – “satanic.”

“Since the child has passed we don’t need to take up any more land for cemeteries so we slap [the babies] on the grill and cook their flesh and make delicious hamburgers…For mass production, we would encourage the US government to create a business negotiation with China about trying to reduce their population by donating children to our government,” the instruction stated.

“We also take children from all organizations, including foster care.”

This ribald lesson in ‘satire’ does not end there. It goes on to discuss the creation of a ‘Dahmer Mini Camp,’ where the motto is ‘you are what you eat.’ For the uninitiated, ‘Dahmer’ is an allusion to Jeffrey Dahmer, the late American serial killer who not only preyed on black men, but had an appetite for them as well. Once your belly laughing has subsided, take a guess as to the demographic that would be targeted for the baby burgers? Give yourself an ‘A’ if you said, “Low income, poverty areas and countries,” the very communities, incidentally, that Planned Parenthood has been accused of catering to in the past.

At this point, some readers may be tempted to shrug off this crazed literary device as the brainchild of a teacher with clear psychological problems. Unfortunately, that would be jumping to a hasty conclusion. After all, we are talking about the radical progressive mindset here.

By now, many people are already familiar with some of the graphic books that have found their way – a bit like worms invading an otherwise perfect apple – onto the shelves of public school libraries. Last month, Stacy Langton, a parent of children in the Fairfax, Virginia School District, brought the subject to a head as she publicly addressed the local school board in an epic confrontation that quickly went viral.

Langton came armed for the meeting in the form of two books available at her child’s school library, ‘Lawn Boy’ and ‘Queer Gender.’ These novels, as Langton explained, contain scenes of “pedophilia, sex between men and boys…” where in one instance “a fourth-grade boy [is] performing oral sex on an adult male…”

And to think the cultural warriors are cancelling Dr. Seuss, Gone with the Wind and Huckleberry Finn.

How did the government respond to this and other complaints forwarded on behalf of parents who might just have some say as to what enters their children’s heads? Incredibly, it sided with the school boards, suggesting that these “contentious” parents could actually be charged as “domestic terrorists” in the future. Even The Washington Post, one of the major mouthpieces for the Democratic Party, called the move a “Big Mistake.”

Okay, back to cannibalism and Jeffrey Dahmer, two subjects many parents never thought their children would be hearing about in school. Much in the same way that the left-wing teachers of transgenderism and critical race theory are getting their very own anthology, so it appears that the doctrinaires of cannibalism are getting theirs. As Thomas explains, students are able to access through their school media centers the 2012 graphic novel, ‘My Friend Dahmer’, which documents the author John Backderf’s teenage relationship with the future serial killer. One Texas school district agreed to allow students access to the book, but on the condition of “counseling support.” Imagine a book that requires the child to enter counseling after reading. Perhaps ‘burn after reading’ would be a better suggestion?

Since it is obvious that such discussions in the classroom will only invite controversy, what on earth could be the ultimate purpose? After all, the teacher could just as easily suggest the mass production and consumption of bugs or vermin, for example, if the purpose of the lesson was to enhance the understanding of satire and creative writing skills. But clearly something else more sinister is at play, and it doesn’t seem to have been an accident.

I am inclined to side with Rhonda Thomas and others who are of the opinion that such radical school lessons are specifically designed to normalize deviance and depravity among children and adults. To turn reality on its head in clear, Luciferian, style to the point where people are no longer capable of determining right from wrong, moral from immoral, and decent from indecent. Worryingly, it seems to be working. How many people could have predicted just 10 years ago that parents would be enthusiastically taking their children to ‘Drag Queen Story Hour’ at their local library? No, this is Satanism at its finest.

“Our schools are targeting our children,” is how Thomas summarized the situation now prevailing in communities across the country. “This goes back to… social-emotional learning. This is shocking their value system, shocking their emotions to be able to break them down and make this normal.”

In short, the goal for these insane lessons is to foment controversy, which by its very definition requires two opposing sides. Classic divide-and-conquer tactics where the only winners are those who wish, for reasons known only to them, to fracture the very foundation of society. Once two warring camps have been created, much as is the case now with transgenderism and critical race theory, then the minority can proclaim victimhood and have their purported rights propped up through every level of society. And with the left-leaning media supporting every diabolical whim of the progressives, they have a powerful ally in their corner.

It’s time that the real victims of these classroom attacks – the children – receive some guarantees that taxpayer-funded schools remain citadels of real and healthy learning, free from the corruption of political ideology.