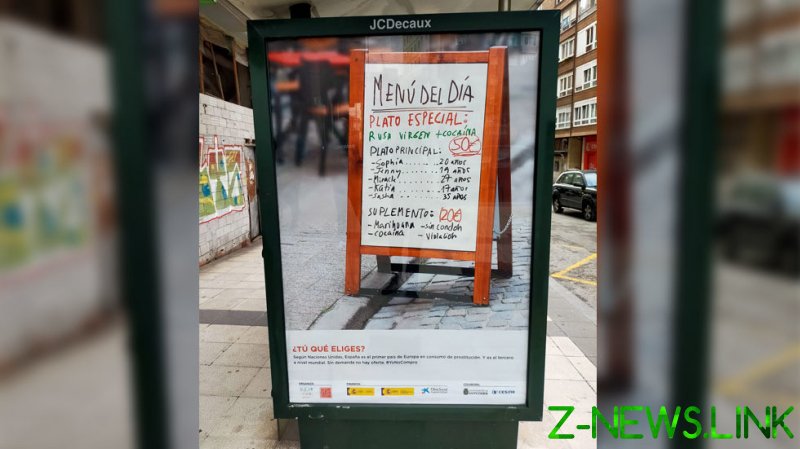 The adverts, posted last week to mark World Day Against Trafficking in Persons, feature a restaurant-style whiteboard offering a special dish of “Russian virgins and cocaine.” Other listings include “Katia, 17 years old,” and “Sophia, 20 years old,” for €50 each ($58). Would-be punters are also told that for an extra fee, they can smoke cannabis, snort banned narcotics and dispense with the use of a condom.

The organization that placed the ads, Asociación NUEVA VIDA, describes them as part of efforts to “abolish prostitution,” evidently aiming to shock viewers into supporting an end to the exploitation of trafficked women. Supporters are challenged to find the marketing materials in the street and upload the supposed menu of teenage girls with the caption “do not buy.”

However, the apparent reliance on stereotypes about Russian women has drawn a furious response from the country’s Spanish embassy. In a statement issued on Monday, Moscow’s envoys said that “our compatriots living in Spain are outraged by the PR-stunt from the NGO, sharing online the placement of provocative banners on the street, mentioning Russian girls as part of the campaign to bring attention to the problem of prostitution in the country.”

The diplomats went on to brand the publicity appeal as “inappropriate” and demanded that authorities “take urgent measures to eliminate the posters and prevent further such incidents.”

Along with other former Eastern Bloc nations like Ukraine, which has previously seen the situation declared as a crisis, Russia has faced comparatively high levels of human trafficking in recent years, with citizens promised jobs and a better life elsewhere before being coerced into working to pay back supposed debts to people-smugglers. The Global Slavery Index estimated in 2016 that around 794,000 people live in conditions described as modern slavery within Russia. The year prior, 1,473 individuals were prosecuted for their role in schemes to deprive people of their liberty, and more than 80% were convicted.

However, the issue has also been a point of political contention in recent years. In 2013, Moscow slammed an annual ‘Trafficking in Persons Report’ published by the US State Department, which ranked Russia as among the worst countries in the world for dealing with criminal networks responsible for exploitation. “The authors of the report again used the unacceptable ideological approach that divides nations into rating groups depending on the US State Department’s political sympathies or antipathies,” one Russian human rights official said, decrying the analysis as politically motivated.