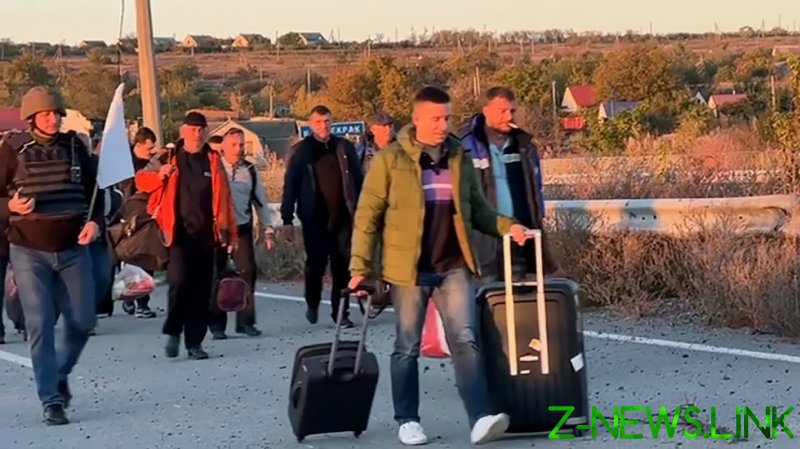 A total of 110 Russians have returned home from Ukraine as part of a major prisoner exchange with Kiev, the Russian Defense Ministry said on Monday. The group included 72 civilian sailors who had been held in Ukraine since February 2022, it added.

In exchange, Moscow released 108 female soldiers to Ukraine. Two women slated for the exchange turned down the offer and said they would like to stay in Russia, the ministry said. All of the Russians who returned home would receive all the necessary medical and psychological assistance, it added.

Kiev also confirmed what it called “another large-scale” exchange. Earlier on Monday, the head of the Donetsk People’s Republic (DPR), Denis Pushilin, announced the swap on social media. The exchange would have involved some 30 soldiers from various parts of Russia, including the DPR and the neighboring Lugansk People’s Republic (LPR), along with the civilian sailors, he said at that time.

Kiev detained dozens of Russian civilians who had been in boats that stopped at Ukrainian ports in late February, when Moscow launched its military operation. Some of them were freed after Russian troops captured the port city of Mariupol, but many others remained in Ukrainian custody.

According to the Russian Defense Ministry, Russian Commissioner for Human Rights Tatyana Moskalkova was directly involved in facilitating the exchange. Last week, she said that 65 sailors could be set free soon, and that talks over their release were in the final stage.

Last Thursday, the two sides exchanged 20 Russian soldiers for an equal number of Ukrainian troops, according to officials from both nations. Moscow and Kiev have repeatedly swapped prisoners since the start of the conflict between the two neighbors in late February.

The last major exchange took place in late September, when 55 Russian soldiers, including those from Donbass, were freed. Kiev also released Ukrainian opposition leader Viktor Medvedchuk as part of the swap. The Ukrainian authorities charged Medvedchuk with treason last year and banned his party, Opposition Platform – For Life, after Moscow launched its military operation in Ukraine.

According to Ukrainian President Vladimir Zelensky, 215 Ukrainian soldiers were returned to their home country in the swap. Those included more than 100 members of the Azov Battalion, within the ranks of which fighters openly embrace neo-Nazi views.