Russian troops near the Ukrainian cities of Kiev and Chernigov are regrouping as the goal of the first stage of its military operation has been completed, defense ministry announced on Wednesday. During a regular press briefing, the ministry spokesperson Major General Igor Konashenkov said “planned regrouping of troops is taking place in Kiev and Chernigov directions.”

He explained that initial stage of Moscow’s military operation involved forcing Ukrainian military “to concentrate its forces, means, resources and military equipment to hold large settlements in these directions, including Kiev,” to tie them up, while avoiding storming the cities, and to defeat them in such a way that would prevent them from using these forces “in the main direction of operations of our Armed Forces – in the Donbass.”

Simultaneously, according to the ministry spokesman, Russia, in order to create “all the necessary conditions for carrying out the final stage of the operation to liberate the People’s Republics of Donbass” continued targeting “long-term defensive fortifications created by the Kiev regime over eight years.”

All main lines of communications, supply and approach of reserves are taken under full control. The air defense systems of Ukraine, the airfield infrastructure, the largest military depots, training and concentration centers for mercenaries were destroyed. Work on them continues. Thus, all the main tasks of the Russian Armed Forces in the directions of Kiev and Chernigov have been completed.

Therefore, Konashenkov underlined, the purpose of Russian forces’ regrouping “is to intensify operations in priority areas and, above all, to complete the operation for the complete liberation of Donbass.”

On Tuesday, following another round of the negotiations with Ukraine in Istanbul, Russian deputy minister of defense Alexander Fomin announced that “a decision was made to drastically, in several times, reduce the military activity on the approaches to Kiev and Chernigov.” He explained this decision, on the one hand, by the fact that the talks with Kiev are entering “the practical stage,” and, on the other hand, by Russia’s wish “to increase mutual trust and to create the necessary conditions for the further development of negotiations.” Thus the announcement was considered by many as a ‘goodwill gesture’ from Moscow.

However, Kremlin spokesman Dmitry Peskov on Wednesday warned against excessive optimism. He said that the agreement of the Ukrainian side to start “formulate concretely and to put down on paper what it proposes” has so far been the only positive outcome of the talks. 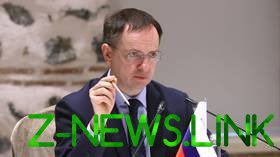 “As for the rest, so far, let’s say, we cannot state anything very promising, any breakthroughs, there is still a very, very long work to be done,” Peskov underlined.

Russia’s lead negotiator, Vladimir Medinsky, in his turn, said on Wednesday that Ukraine agreed in principle to officially become a neutral country. Ukraine’s bid to join NATO was one of the reasons Moscow said it launched a military campaign against the country last month.