Moscow will convene an extraordinary meeting of the UN Security Council over the incident in the Ukrainian town of Bucha, Russia’s deputy permanent representative with the organization, Dmitry Polyansky said Sunday. Ukraine has accused Russia of massacring civilians in the town, while Moscow dismissed the incident as staged by the Kiev forces.

“In light of the blatant provocation by Ukrainian radicals in Bucha, Russia has demanded a meeting of the UN Security Council to be convened on Monday, April 4. We will bring to light the presumptuous Ukrainian provocateurs and their Western patrons,” Polyansky said in a Telegram post.

Graphic footage from Bucha, a town to the northwest of Kiev, emerged over the weekend, showing multiple bodies clad in civilian clothing scattered around. Kiev was quick to blame Russian military for the incident, with Ukrainian foreign minister Dmytro Kuleba alleging it was a “deliberate massacre”.

“The Bucha massacre was deliberate. Russians aim to eliminate as many Ukrainians as they can. We must stop them and kick them out. I demand new, devastating G7 sanctions NOW,” Kuleba said on Twitter. 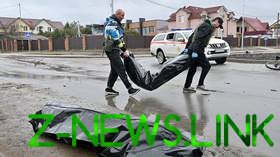 Top Western politicians were quick to back and amplify Kiev’s claims, with NATO chief Jens Stoltenberg branding the incident “a brutality against civilians we haven’t seen in Europe for decades.”

“And it’s horrific, and it’s absolutely unacceptable that civilians are targeted and killed, and it just underlines the importance of, that this war must end. And that is President Putin’s responsibility, to stop the war,” Stoltenberg told CNN.

Similar stance has been voiced by many other officials, with some explicitly pinning the blame for the ‘massacre’ on Moscow. French President Emmanuel Macron said, for instance, that “Russian authorities will have to answer for these crimes”.

Moscow, however, has firmly rejected any involvement, accusing Kiev of staging the whole affair to frame Russian troops. The country’s Defense Ministry said that Russian troops pulled out of the town on March 30, with local mayor confirming it in a video address a day after without mentioning “any local residents laying shot in the streets.” The purported “evidence” of the incident emerged only four days after the withdrawal, when Ukrainian intelligence and “representatives of Ukrainian television arrived in the town,” the military added, stressing that multiple inconsistencies show that the affair “has been staged by the Kiev regime for Western media.”