Russia is drowning in unclaimed oil that have nowhere to store 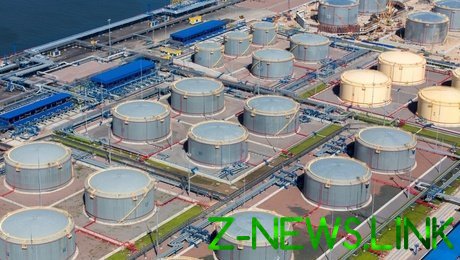 The sharp drop in oil demand has led to the fact that storage of oil and oil products in Russia is practically no free tanks. This situation exists all over the world. In Europe as free tanks of oil traders to use the tankers, freight, which in places rose in price seven times.

This was reported “Interfax” the Chairman of the Board of Directors of JSC “Petersburg oil terminal” Michael skigen, says review Finanz.ru.

According to him, soon sharply reduced shipments of crude oil from abroad. On the territory of the PNT there are 37 tanks for storage of petroleum products, but they are all already nearly full.

Shikin talking about a completely unique situation in which production, processing and shipment of oil continues, but the demand for it at this. Soon shipped abroad, and all can cease and where to store unused oil will have to be addressed urgently.

“How long this situation will continue is hard to say. Depends on when they lifted the quarantine regimes. But a very serious, down to almost a complete stop, the contraction along the chain of production and supply of petroleum products in the next few months is not seen as a horrible fantasy,” – said the head of the PNT.

As writes “Kommersant” with reference to sources in the oil industry, as storage tanks are already considered rail cars that operators perevozki ready to provide oil.

According to the Director of Agency “Infoline-Analytics” Michael Burmistrova, the problem of storage of petroleum products became relevant for all major market participants – “Rosneft”, “LUKOIL”, “Surgutneftegaz”, “Tatneft” and “Gazprom oil”.

To stop the work of oil refineries is not possible, because they are enterprises of a continuous cycle. However, as said Burmistrov, the existing conditions are able to bring refineries scheduled maintenance, despite the economic inefficiency of such measures, but the implementation of the terms of the deal with OPEC to significant reduction in production from may of this year may lead to a reduction in the supply of raw materials to the refinery.

In Europe observed similar problems with the storage of fuel, where in close proximity to major fuel terminals off the coast are 30 tankers that can’t unload on land, and all tanks filled up. In total, the tanks in these tankers contain millions of tons of kerosene, gasoline and other petroleum products, according to Reuters.

Thus, while the carriers unsuccessfully looking for buyers for fuel is increasing daily the number of tankers from European shores. Basically, they accumulated in close proximity to refineries and logistics hub Amsterdam – Rotterdam – Antwerp, and also in some parts of the Mediterranean.

British Petroleum uses to store fuel for two or three months two leased tankers standing off the East coast of the UK.

In abundance of cheap oil choke all the continents. In the United States over the past week, stocks of raw materials and petroleum products increased by 30 million barrels. The volume of unclaimed oil buyers statistics are not recorded never before in history, the newspaper notes.

As reported by OPEC in its report on the state of the oil market, one in five produced barrel will be superfluous by the end of April.

The head and co-owner of Gunvor torbjörn törnqvist sees the situation as even gloomier. He estimates the excess of “black gold” at 25 million barrels per day, accounting for a quarter of world production. He predicts that in 3-4 weeks, all tanks for oil storage will be filled her completely, Tornqvist said in an interview with Bloomberg.

The OPEC deal+ to reduce the production doesn’t resolve the storage issue. The volume of oil on the market will drop to 9.7 million barrels a day, and this will only happen in may.

Given the current tensions between Russia and Saudi Arabia, as well as the traditional tendency of market players to the hype, in practice the reduction of production, and all may be twice less – about 5 million barrels per day, assesses the situation of Goldman Sachs.

According to the beginning of April this year, Russia produced 11.2 million barrels of raw material per day, exporting about half of its oil output. From 1 may under the agreement, OPEC+ production is required to reduce by 23%, to 8.5 million barrels a day, the lowest since 2002.

In the future, OPEC predicts the strongest in the history of the fall of demand for oil.

As noted by OPEC, the pandemic coronavirus is also in the current year will cause a sharp decline in oil supplies from countries not members of the organization of countries-exporters of oil. It is expected to reduce supplies by 1.5 million barrels per day, but also possible interruptions in the supply due to the coronavirus.

“The fall in oil prices has forced the company to reduce capital spending to its lowest level in 13 years”, – stated in the April report of the organization.

Do not pass this Cup and the United States, although they will suffer here are much less than other market participants, and make predictions the experts of the OPEC. It is assumed that oil supplies from the USA in the current year will be reduced by approximately 150 thousand barrels per day.

The growth of oil supply, according to OPEC forecasts, in the current year can be observed only in four countries – Norway, Brazil, Guyana and Australia.