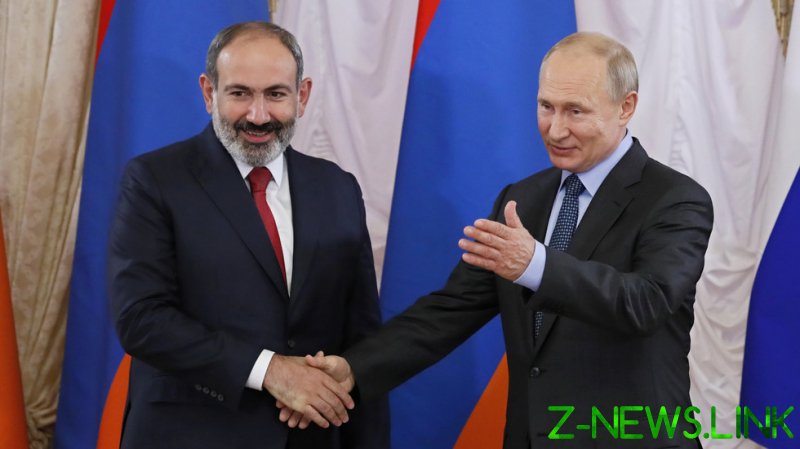 Russia is concerned with the developments and believes that the immediate goal is to cease hostilities, the Kremlin said in a statement. The phone call between Russia’s Vladimir Putin and Armenia’s Nikol Pashinyan was made on Yerevan’s initiative.

Earlier in the day, Russian Foreign Minister Sergey Lavrov called both his Azeri and Armenian counterparts to express Moscow’s concerns and urge deflating the conflict.

Speaking to Putin, Pashinyan stressed that third parties from outside of the region should not get involved in the situation, according to the Armenian side.

The prime minister earlier rebuked Turkey, a long-time ally of Azerbaijan, for interfering in the situation. Ankara voiced support for Baku in the unfolding stand-off and blamed Yerevan for the Sunday violence.

Hostilities between Azerbaijan and the Armenia-backed Nagorno-Karabakh erupted after Azeri forces launched an offensive on Sunday morning. Baku said it was responding to shelling of its forces, but Yerevan rejected the justification, accusing its opponent of breaking a ceasefire.

The region, where the population is predominantly Armenian, broke away from Azerbaijan in the late 1980s, getting military and economic support from Yerevan. Amid the flareup, both Azerbaijan and Armenia imposed martial law and voiced their determination to fight on.

Russia is part of the mediation group of the Organization for Security and Cooperation in Europe (OSCE), working to tone down the tensions between Azerbaijan and Armenia and negotiate a peaceful resolution to their dispute over Nagorno-Karabakh.