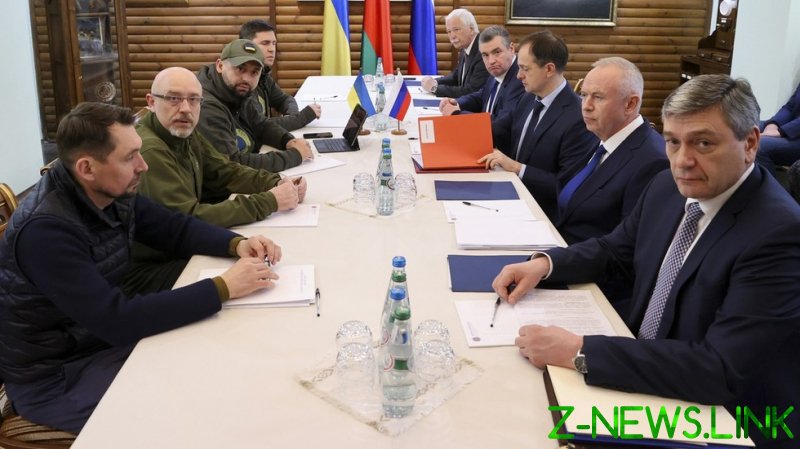 According to the report, Moscow is now prepared to let Ukraine “join the European Union if it remains military non-aligned as part of ongoing ceasefire negotiations” and drops its NATO aspirations.

“The draft ceasefire document does not contain any discussion of three of Russia’s initial core demands – ‘denazification’, ‘demilitarization’, and legal protection for the Russian language in Ukraine,” the newspaper asserted, adding that its sources spoke “under the condition of anonymity because the matter is not yet finalized.”

The reported shift in Moscow’s position comes ahead of a new round of Russia-Ukraine talks scheduled to take place in Turkey on Tuesday. Moscow and Kiev have held three rounds of in-person talks and further contacts via a video link, yet the negotiations failed to yield any tangible result apart from the two sides finding some common ground on humanitarian corridors and evacuation of civilians from combat zones.

Mid-March, the Financial Times reported an imminent breakthrough in the talks, claiming that the two sides had drafted a 15-point peace plan. The report, however, was refuted by both Moscow and Kiev, while no actual breakthrough occurred. The new claims by the newspaper have not invoked any official reactions so far.

The report appeared to be directly contradicting fresh statements by Russian Foreign Minister Sergey Lavrov, who told Serbian media that both “denazification” and “demilitarization” remain among the main goals of Moscow.

“It’s in our interest that these negotiations yield a result. A result that will meet our principal goals,” the top diplomat stated, adding that recent events in Ukraine have clearly shown that hard-line nationalist fighters “are exploring Nazi warfare style in practice.”

“If you have seen how the Nazi Ukrainians from the Azov or Aidar battalions treat Russian prisoners of war now, I think everything becomes clear to you,” Lavrov said, referring to a gruesome footage, purporting to show torture and execution of Russian POWs by the Ukrainians that emerged over the weekend.

Moscow launched a large-scale offensive against neighboring Ukraine late in February, following a seven-year standoff over Kiev’s failure to implement the terms of the Minsk agreements, and Russia’s eventual recognition of the Donbass republics of Donetsk and Lugansk. The German- and French-brokered protocols had been designed to regularize the status of those regions within the Ukrainian state.