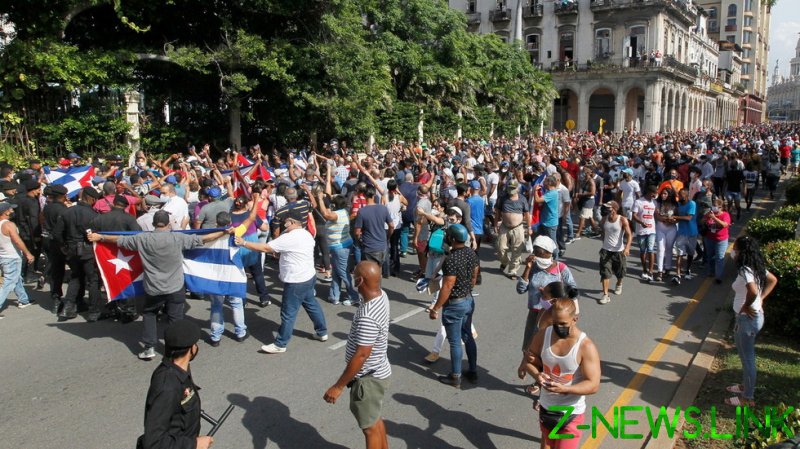 In a statement issued on Thursday, one of Moscow’s top diplomatic representatives, ministry spokeswoman Maria Zakharova, blasted American “impudence” for suggesting that the demonstrations were a result of the Cuban government’s own mistakes. Instead, she described the approach a part of “yet another political staging.”

“Washington’s cynicism is shown by the fact that throughout the entire period of the existence of revolutionary Cuba, it purposefully pursued a strategy of strangling the country, discriminating against its people and destroying the economy,” she went on.

“Their thinking here is simple – it has already been repeatedly deployed by Washington in different situations. But in every case, there is the same goal – sparking ‘color revolutions’ in response to unwanted regimes.” The approach, the official added, hinges on applying sanctions and provoking tensions by worsening the socio-economic situation in the country.

Zakharova said that the idea authorities in Havana alone were to blame for fomenting discontent was patently false. “Despite all the measures taken by the central Cuban authorities to support the country’s economy and provide assistance to the population, it is they who are accused by Washington of the current crisis situation,” she said. “At the same time, the Americans, as always, keep silent about their own subversive actions and opportunistic aspirations.”

She went on to compare the incident to scenes in Washington in January, when supporters of then-President Donald Trump forced their way into the seat of government in protest of his election defeat. “Where were their concerns about humanitarian values, political pluralism and democratic freedoms,” she asked, “when those who stormed the Capitol… were detained across America, accused of ‘domestic terrorism’ and are now facing criminal charges?”

Earlier this week, US State Department spokesman Ned Price said that the circumstances that led to tens of thousands of protesters taking to the streets were down to the “actions and inactions, mismanagement, corruption of the Cuban regime” and not because of “anything the United States has done.”

“We are always considering options available to us that would allow us to support the Cuban people, to support their humanitarian needs, which are indeed profound,” Price told reporters.

Authorities in the island nation said on Thursday that they would drop taxes on those bringing food, medicines and other essentials into the country in response to the most significant anti-government protests in decades. Shortages of vital goods have been a major source of contention for demonstrators. Cuba has faced significant embargoes, sanctions and blockades from Washington since 1958.