Home / WORLD / Rules for me but not for thee: Obama’s b-day is the same as Hunter Biden’s crack video & both are shouting the quiet part out loud

Rules for me but not for thee: Obama’s b-day is the same as Hunter Biden’s crack video & both are shouting the quiet part out loud 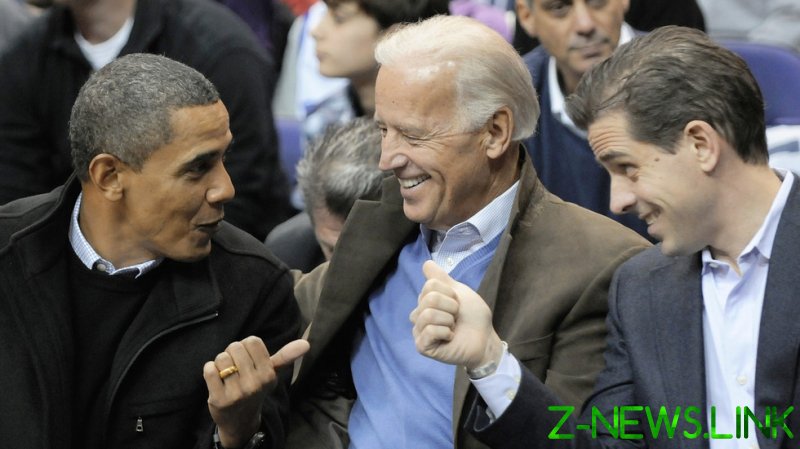 The ‘rules’, such as they are, simply do not apply to the ruling class, and trying to apply them will only end in humiliation. This dual-level society has only gotten worse under the Covid-19 regime, in which ordinary Americans can no more expect to get together and party with friends than they can expect to record themselves spending thousands of dollars on a depraved drug spree and emerge with their reputations intact.

Presidential scion Hunter Biden, caught on video in the midst of a crack binge complaining about another stolen laptop in a video released by the Daily Mail on Wednesday, is no different in his bull-in-a-china-shop approach to the social order than former President Barack Obama was in plotting the 700-guest star-studded birthday party he set up for last weekend while simultaneously talking out the other side of his mouth about the dangers of the “deadly” Delta variant. Card-carrying members of the ruling class don’t believe in those ‘rules’ at all – indeed, they exist solely as a tool to keep lesser beings in their place, an epistemological cattle prod to remind them who’s in charge.

Straight-faced journalists tied themselves in logical knots to defend the Obamas’ partying in the face of the couple’s own year-plus recrimination session directed at the American people, arguing that it was totally OK, the former first couple’s guests were a ‘sophisticated’ crowd, and everyone knows sophistication is directly proportional to one’s ability to infect another person with Covid-19. Move along, nothing to see here.

Indeed, those following the Obama birthday saga were all but shamed if they publicly disapproved of the former president’s refusal to cancel the party, which was hailed as “epic” as paparazzi waited with bated breath to see who of the ‘A-list crowd’ was still invited.

Guests and performers were barred from taking photos and asked to delete images of the birthday boy sans PPE, which they obediently did (but not before telling their followers what they were missing). “If any videos surface it’s going viral,” rapper Trap Beckham told his Instagram followers by way of explanation, giddily affirming that “He danced the whole time. Nobody ever seen Obama like this before” (had anyone wanted to?). But the demand to remove all photos was ultimately good-natured – after all, what’s the point of belonging to the ruling class if you can’t rub your social inferiors’ noses in it? How would the hoi polloi know who to worship, envy, and ultimately fear if they weren’t fed a constant stream of content featuring people who make more money in a day than they will in a year?

Included among the guests were a smattering of some of the most obnoxious Covid-19 scolds in the country, from actor and ‘freedom’-disdainer George Clooney to singer and mandatory vaccination fan Bruce Springsteen – none of whom apparently required mask checks or vaccine scans at the door when among their wealthy pals, even as they insist on such treatment for less, er, ‘sophisticated’ demographics. Late-night TV host Stephen Colbert, virus shamer par excellence, was forced to explain his own presence on the island by claiming he had already booked tickets when he received notice he and his wife had been “scaled back,” insisting that rather than throw them away like a normal ruling class narrative manager, he instead opted to (frugally!) take the trip anyway, forced to dismiss the Daily Mail’s claim he, too, had a home on the alcove for the rich and famous.

The much-gossiped-about birthday celebration saw the liberal Beautiful People partying like it was 2019, with nary a mask nor that haunted look many get when they’re caught flouting social distancing diktats. Why should they feel guilty? It’s no different than the Washington Examiner reporter chided for photographing Washington, DC Mayor Muriel Bowser flouting her city’s own mask rules. How dare she do her job – or rather, how dare she perform the function once served by journalists?

Now the same cluster of narrative managers are up in arms about a video depicting Hunter Biden, in which he complains yet another laptop – this one containing footage of “crazy f**ing sex s***” – has been stolen by a passel of Russian (who else?!) drug dealers who supposedly planned to leave him for dead in a hotel bathtub and/or sell the incriminating video to TMZ. In the clip, posted to Daily Mail on Wednesday, a nude Hunter recounts to a prostitute about how he was partially passed out in a pool when the Evil Russians™ walked off with another of his laptops for (presumably) blackmail purposes.

Why the younger Biden continues to record his sex and drug sessions when this marks the third laptop to find its way into the ‘wrong’ hands would seem mystifying – except Hunter lets it slip during the DM clip that he actually wants his sex tapes released to the public. Indeed, he’s worried the ‘Russian drug dealers’ will make more on his sex tape than he could – or worse, that “maybe no one wants to see me naked.”

Needless to say, the narrative managers panting over Obama’s party and defending Bowser’s maskless night out are staying mum about Hunter Biden’s latest drug fueled romp into the world of lost laptops. The media of record’s willingness to drop everything and circle the wagons whenever a member of the ruling class has a crisis is well-known, and the pandemic has somehow made the hypocrisy even more difficult to ignore – perhaps because the rest of us have been forbidden from distracting ourselves with our social lives, work, seeing family, or other normal aspects of the human experience that have suddenly been declared viral vectors.

But then, the ruling class flaunting its privilege in the face of the austerity it has itself inflicted is nothing new. Nor is the election of presidents intent on fighting the increasingly pathetic War on Drugs who have themselves spent years on the other side of that war. Before Presidents Bill Clinton, George W. Bush, and Barack Obama were throwing drug users in jail by the thousands, they were heavily rumored to be – and in at least two cases admitted to – using the same drugs themselves, some even boasting about that use in their autobiographies. Hunter Biden’s protection from the consequences of his actions merely proves that pattern persists, with the younger Biden boasting about making “a gazillion dollars” while less fortunate drug abusers faced mandatory 5-year minimum sentences for possession of a piece of crack “the size of a quarter” thanks to daddy Biden’s 1994 crime bill, which also opened the door to confiscating everything a person owned under the guise of ‘civil asset forfeiture’, a legal monster that in some places now takes more money from innocent people than actual criminals.

One might ask why we expect the influential voices hypocritically demanding Americans be strung up by their ears for increasingly petty victimless crimes (‘Shoot the antivaxxers!’ has become a popular rallying cry) to be squeaky clean themselves. The problem lies several layers beneath, with the question of why the working class allows itself to be so shamelessly exploited by such lowlives whose one redeeming quality seems to be the number in their bank accounts. When those accepted as the exploiters are as morally repugnant as an Obama, a Bush, or a Biden, there’s no excuse for promoting them as role models, stewards for American values, or anything but cautionary tales.