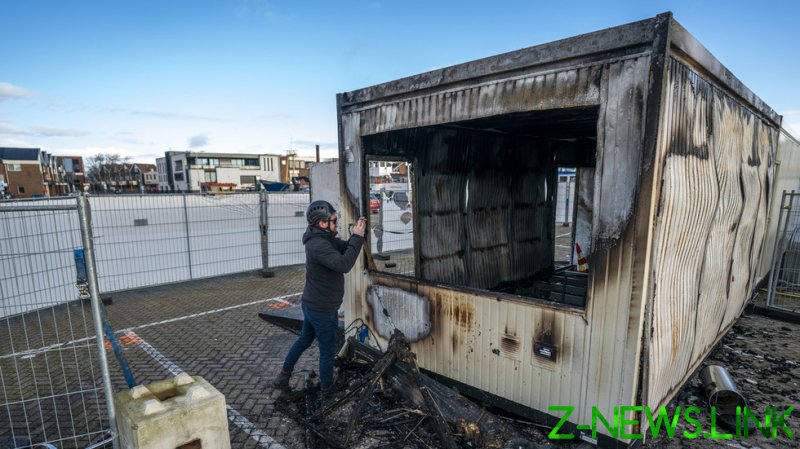 A group of rowdy protesters gathered in the port area of Urk, 80 kilometers (50 miles) northeast of the capital, Amsterdam overnight, shortly after the curfew went into effect at 9pm. The group was driving cars, honking horns, and waving national flags at the square, footage from the scene shows.

The protesters became rowdy and set a drive-in coronavirus site located at the square on fire. The group then apparently waited for police to arrive to taunt the officers and pelt them with various projectiles.

Minor scuffles between the curfew-defiant individuals and police were also observed in other parts of the town. Some protesters launched fireworks at the officers, who arrived in full riot gear and a sizeable unit of police dogs.

“This is not only unacceptable, but also a slap in the face, especially for the local health authority staff who do all they can at the test center to help people from Urk,” the local authorities said, promising to strictly enforce the curfew in the future.

A similar incident also unfolded in the town of Stein close to the border with Belgium. A group of around 100 young people gathered in the streets, playing music and drinking. When a sizeable police force was deployed to disperse them, scuffles ensued, resulting in at least 14 arrests.

Protests against the nighttime curfew continued in the Netherlands on Sunday, with the southern city of Eindhoven becoming the hotspot. At least 30 people were arrested near the train station where the demonstrators pelted foreign objects at the police, overturned cars and set barricades, built from bicycles snatched from nearby parking lots, on fire.

Police responded to the unrest with tear gas and water cannons. One of the clips from the scene showed a female protester being smashed against a concrete structure by a powerful sprout of water.

Other footage circulating on social media has captured what is claimed to be a police van highjacked by the Eindhoven protesters, with the officers chasing after it on their feet.

Unlike many countries worldwide, the Netherlands took a laissez-faire approach in battling the coronavirus pandemic throughout most of 2020. The situation changed in December, as cases mounted and the government turned to harsher measures, and ultimately to the first curfew since WWII.