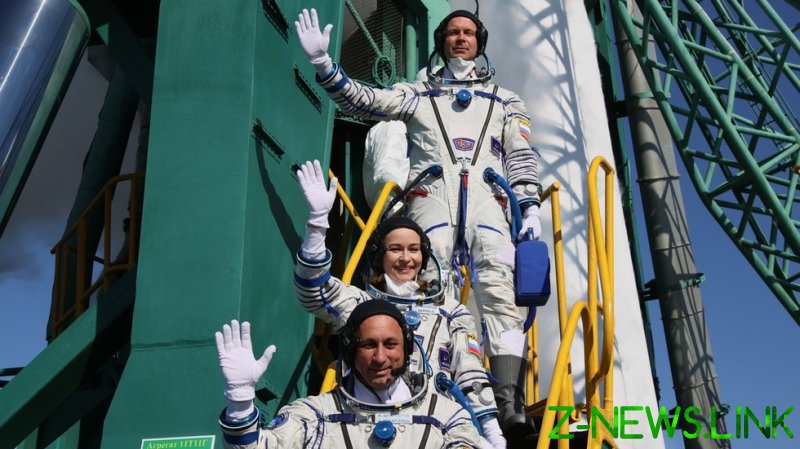 Actress Yulia Peresild, movie-maker Klim Shipenko and cosmonaut Anton Shkaplerov blasted off from the Baikonur spaceport in a Soyuz-2.1a rocket. They plan to shoot a screenplay called ‘The Challenge,’ which is set to soar into the record books as an unprecedented feat of cinematographic achievement.

According to Russia’s space agency, Roskosmos, the passenger pod separated from the launch stage of the rocket shortly after liftoff, and was propelled toward the joint orbital base operated by international astronauts and cosmonauts before locking onto the Russian segment of the base. The docking process takes several hours and the crew are expected to be on board the station by just after 5:00pm Moscow time.

Already aboard the ISS are two Russian spacemen and three Americans, as well as Japanese and French astronauts. The Russian cosmonauts, Oleg Novitsky and Peter Dubrov, will support the silver screen duo in shooting ‘The Challenge.’

The story centers on a doctor, played by Peresild, who flies into orbit to save the life of a cosmonaut. In total, the mission will take 12 days before they set course back down to Earth and land on the Kazakh steppe.

Novitsky posted a snap from the space station of the rocket carrying the team rising up through the clouds and into orbit.

Peresild and Shipenko were locked in a race against the clock with ‘Mission: Impossible’ star Tom Cruise, who had also hoped to set the record for first feature film made in space. The Russian team, however, have set their sights on beating the Hollywood icon into the cosmos, despite his backing from both NASA and Elon Musk’s SpaceX.