Home / WORLD / River of blood: Russia to investigate over ecology concerns after Karelian water turns red due to slaughter at local fish farm

River of blood: Russia to investigate over ecology concerns after Karelian water turns red due to slaughter at local fish farm 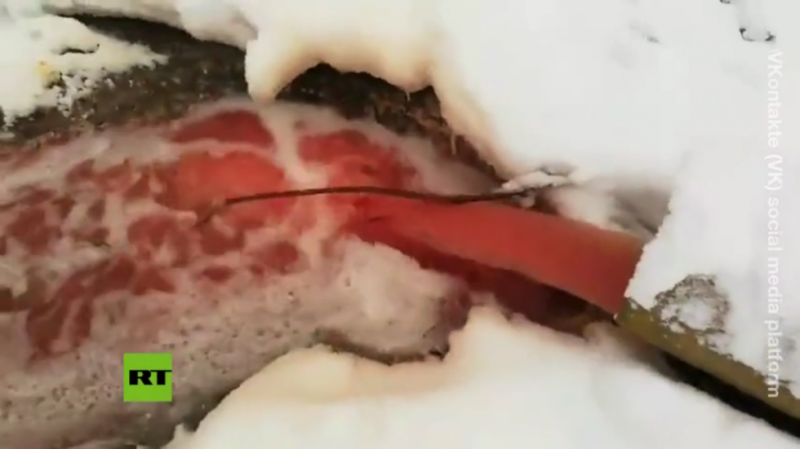 The legal step comes after residents of Karelia, close to Finland and around 800km from Moscow, sent videos and photos to the local Ministry of Natural Resources, which politician Andrey Rogalevich claimed were ignoring the disaster. The public outcry led to the fish farm being visited by inspectors, who have appealed to the courts to close the enterprise down.

Writing on the social network VK, Rogalevich revealed that Karelians had complained about the fish farm back in the spring, but checks by the authorities had found nothing wrong. Months later, the town of Segezha also had a river of blood running through it.

The river, a source of local drinking water, is said to have been contaminated by blood, fat, and entrails. According to law, liquid waste must be treated and then managed by a specialized organization that pumps out and disposes of wastewater.

“The disregard for ecology continues, no matter how they try to convince me otherwise,” Rogalevich wrote. “The landscape, streams, and rivers have been turned into a filming location for scenes on Mars.”

The politician estimated the cost of damage at millions of rubles, with the Ministry of Natural Resources noting that trees in the vicinity had been damaged to the extent that their growth was affected. The department also pointed out that this was not the first time a trout farm had been caught breaking the same rule, with another being fined 150,000 rubles ($2,000) in 2016.