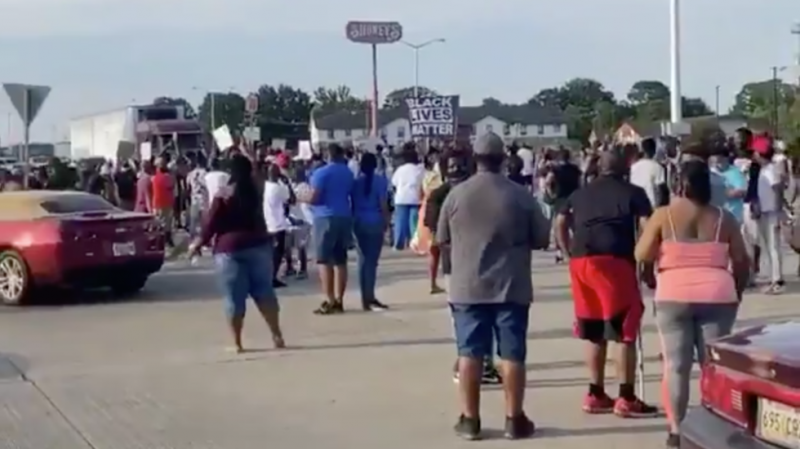 Crowds of activists gathered on Saturday evening at the Shell gas station along Evangeline Thruway, where Trayford Pellerin, 31, was shot and killed Friday night.

A group of protesters demanding justice soon spilled onto the road, blocking it with a human chain, and declaring that “nobody gets past this line!”

Initially peaceful, some protesters reportedly threw bottles and rocks at police cars, and faced off with a line of riot cops.

Pellerin was shot nearly a dozen times after Lafayette Police Department officers responded to a disturbance call about “a man with a knife” at a gas station around 8pm Friday, and later died in a hospital.

Denouncing the incident as yet another example of systemic racism, BLM activists and a local ACLU branch branded it a cold-blooded “murder,” and accused police of escalating a “routine encounter” into a “deadly shooting spree.”

While the investigation is ongoing, Lafayette Mayor-President Josh Guillory was forced to address public anger in a late Saturday statement, insisting that the officers used deadly force against Pellerin only “when it became apparent the armed individual was attempting to enter a convenience store, threatening the lives of the customers and workers inside.”