Revenge of the stairs: White House dismisses Biden stumble as minor mishap in windy weather, but some jokingly blame Kremlin 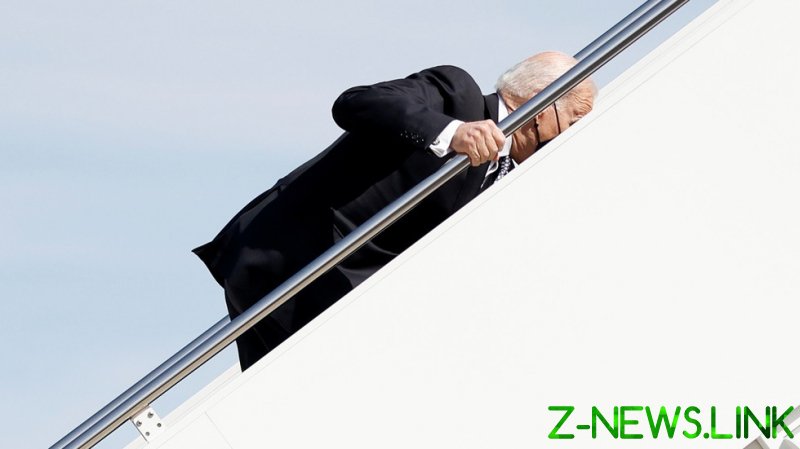 The video of Biden’s stumbling walk up the steps on Friday provided the inspiration for many jokes, ranging in tone from light-hearted puns and video game mashups, to ableist digs, and partisan attacks gleefully shared by the Trumpworld.

The outburst of mockery from the right is easy to understand. After all, Biden-friendly media was eager to play up every instance of Donald Trump’s awkward behavior when he was the president. And, while on the campaign trail, Joe Biden wasn’t beyond making a few boastful comparisons between himself and his Republican rival, especially when his own age and physical fitness came into question.

The White House understandably downplayed the stair incident, blaming windy weather and assuring the US public that their leader was 100% fine after the stumbling episode.

But some people quipped that the situation could have been more sinister than it looked. What if it’s not the wind, or age, or simple human error, they posited, but a clandestine operation to retaliate for Biden calling a certain world leader a “killer”? The ODNI and MSDNC are already on the trail!

It’s anyone’s guess as to whether the unfortunate stair was doing someone’s bidding. But Russia has long been the favorite boogeyman for people in the US who portray Trump as an “illegitimate president” and an agent of Russia’s Vladimir Putin.

Rachel Maddow, for example, insinuated this week that Trump empowered a Russian operative to sabotage the US’ response to Covid-19. She capped the episode by calling the story “nutty stuff” – though presumably not in the sense that it was an evidence-free conspiracy theory.