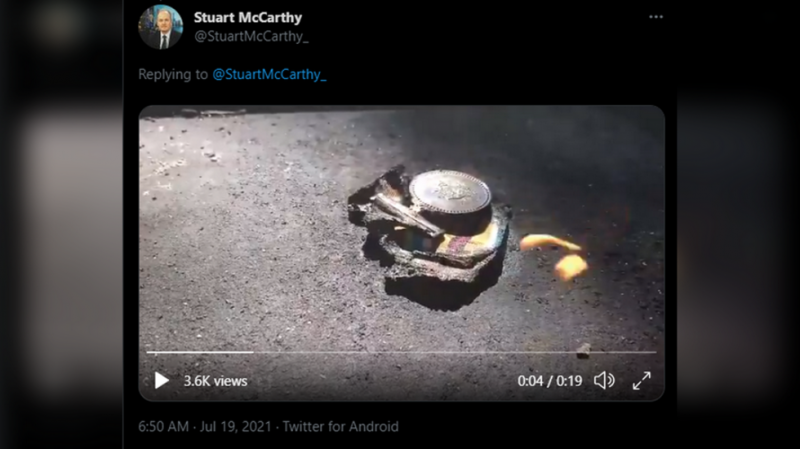 Stuart McCarthy, whose 28-year military career included two tours of Afghanistan, announced on Monday that he would burn Australia’s “badge of shame” and then present the ashes to his representative in parliament.

“The Morrison government’s conscious decision to leave hundreds of our former Afghan civilian interpreters, other loyal allies, and their family members behind to be slaughtered by the Taliban – the same terrorist organisation we were sent to fight for two decades – now renders this medal a badge of shame,” he wrote in a statement explaining his decision.

He later published a video on Twitter showing the ribbon covered in flames.

McCarthy had spearheaded a campaign to relocate Afghan interpreters who worked with Australian forces as Canberra carried out a full withdrawal from the war-torn nation, which was completed earlier this month. The ex-army officer accused Prime Minister Scott Morrison and his “pathetic” government of betraying Afghan employees after initially signaling that they would not be left behind.

“The Morrison government’s hands are now awash with blood. Dozens of our civilian staff have already been brutally murdered and hundreds more have been left for dead at the hands of the Taliban,” he wrote in his statement.

After withdrawing the bulk of its forces from Afghanistan in 2013, Canberra established an employee visa program for local contractors, which reportedly allowed as many as 1,200 Afghans to resettle in Australia. However, it’s believed that a similar number of Afghan ex-employees still remain in their homeland and have faced difficulties obtaining visas. McCarthy wrote in a recent op-ed that due to lobbying and media pressure, the government has approved 160 resettlements over the past month. But many of these cases involved Afghans who had initially requested visas as long as six years ago, and the hundreds who remain in Afghanistan have been told that it will take up to 12 months to process their applications. Some have already been told that they are not eligible for relocation because they were “subcontractors” and not working directly for the Australian military, according to McCarthy.

There have been similar concerns raised about the fate of Afghans who worked for the US military. Washington has been accused of not doing enough to ensure that local interpreters and other former employees are able to leave Afghanistan in order to avoid potential reprisals from the Taliban. Responding to these criticisms, the Biden administration announced last week that it would step up efforts to evacuate Afghan nationals who assisted US and coalition forces during their nearly 20-year stay in Afghanistan.

The Taliban have made rapid territorial gains since the US military and its NATO allies began accelerating their withdrawal from Afghanistan in May. Australia completed its full withdrawal from the country earlier this month, but Canberra’s participation in the conflict has been sullied by allegations of war crimes. Reports about Australian troops murdering civilians and carrying out other disturbing acts have been circulating in the media for the last several months and prompted a defamation lawsuit from one of the soldiers allegedly involved in the crimes.