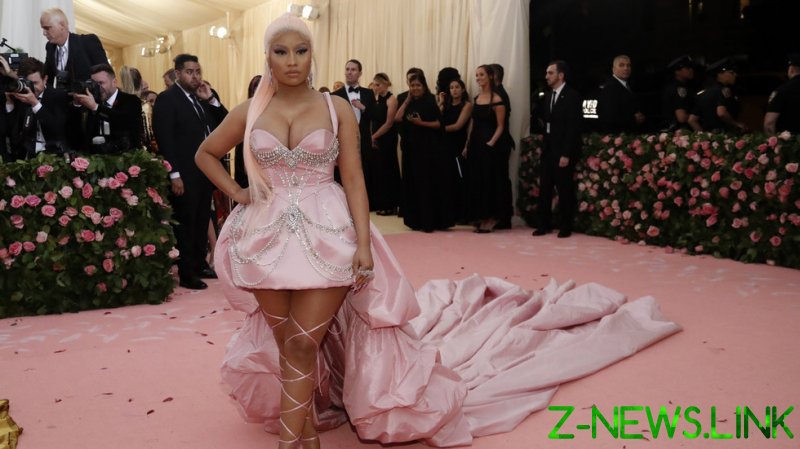 “My cousin in Trinidad won’t get the vaccine [because] his friend got it & became impotent. His testicles became swollen,” the Trinidad-born Minaj tweeted on Monday evening.

“His friend was weeks away from getting married, now the girl called off the wedding. So just pray on it & make sure you’re comfortable with [your] decision, not bullied,” she added.

The tweet attracted a lot of attention, with many journalists wondering if Minaj will get banned or the tweet censored on account of ‘medical misinformation’ that social media platforms have been suppressing at the urging of the White House.

Some of Minaj’s fans were alarmed as well, with one begging her to “please get educated on this topic” because “individual cases shouldn’t be used to deny the vaccine.” The fan added, “Look at the research. Vaccine are HIGHLY effective. This is a FACT. This isn’t opinion.”

Others deployed their Google medical degrees, speculating that the cousin’s friend had testicular cancer or suffered from sexually transmitted diseases instead, and couldn’t have possibly had such a reaction to whatever Covid-19 shot he actually took.

Minaj herself was not against the jab. “I’m sure I’ll b[e] vaccinated as well [because] I have to go on tour, etc,” she told a fan who was apprehensive about getting the second dose, and felt pressured to get the first because otherwise he couldn’t apply for jobs.

“A lot of countries won’t let [people] work [without] the vaccine. I’d [definitely] recommend they get the vaccine. They have to feed their families,” Minaj added.

To a fan that said she got the vaccine and didn’t get the virus, the rapper replied, “That’s amazing babe. This is the norm.”

“Why couldn’t you say this first?” asked another fan. “Cuz I say what I want when I want how I want puddin pop. Internet don’t scare me,” was her retort.

Born Onika Tanya Maraj-Petty in Trinidad and raised in New York, Minaj has been a singer since 2004 and made her acting debut a decade later.

She has been described as “the most influential female rapper of all time” and has the largest Instagram following of any rapper, with 155 million fans.