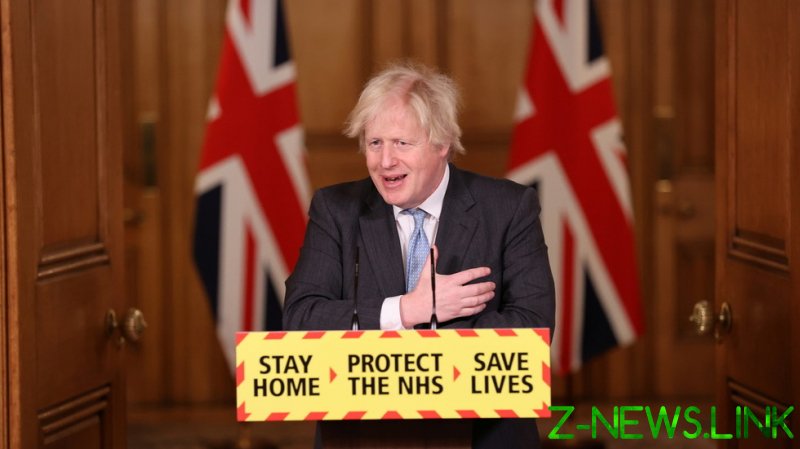 Set against a background of bright blue, the speaker’s podium – flanked by four Union Jacks – could be swapped out for a two-person particleboard table. A mammoth flat-screen dominated one wall, flashing a coat of arms.

Adding insult to injury, the Cabinet Office reportedly claimed the makeover cost a tidy £2,607,767.67 in response to a Freedom of Information request filed through the Press Association.

Many on social media were taken aback to discover that their government had blown their taxes on such a ghastly setup.

Others tried to find science in the ugliness…

…while many suggested the balance of construction had either been pocketed in good-old-boy graft or spent in upscale surveillance equipment.

…or was the lion’s share of the money sunk into trap doors for disposing of troublesome journalists?

The Daily Mail claimed to have gotten to the bottom of the mystery, declaring“much of the equipment used in the briefing room was installed by a Russian-owned company with links to state broadcaster Russia Today.” A company called Megahertz was said to have been hired to “install microphones, control desks, cameras and computers” – few of which were actually visible in the preview shots of the hideous briefing room.

MP Chris Bryant pronounced the “new vanity project” to be “dodgy” in an interview with HuffPost, which confirmed Megahertz had done “crucial work” to prepare the cheesy setup to receive timeless words of wisdom from PM Boris Johnson and his spokeswoman Allegra Stratton. Why the UK would employ a company seemingly controlled by a nation awaiting designation as London’s “biggest state-based threat” to construct its briefing setup was not explained. However, despite the temptation of the low-hanging “blame Russia” fruit, Stratton told the Daily Mail that “all the correct processes have been followed,” insisting “it’s absolutely not something we would ever cut corners on.”