Putin says reaction to grounding of Ryanair flight is just ‘surge of emotions,’ in talks with Belarus’ embattled leader Lukashenko 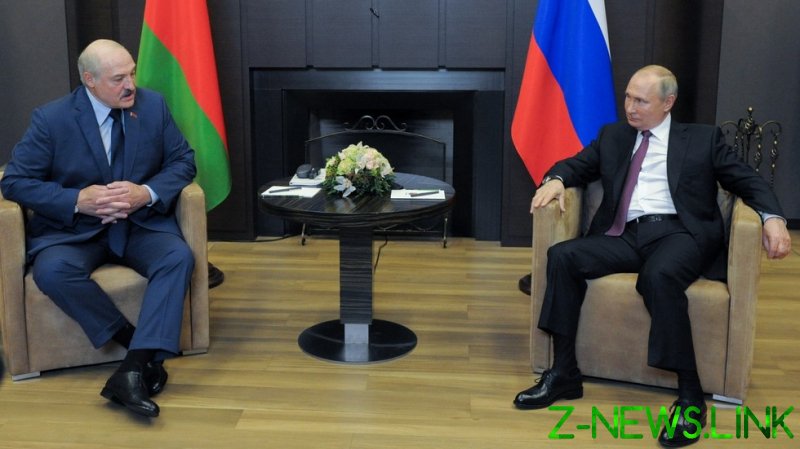 Speaking as part of a meeting held in Sochi on Friday with his Belarusian counterpart, Alexander Lukashenko, Putin remarked that the outcry was “a surge of emotions.”

“The plane of the President of Bolivia was once grounded,” Putin recalled. “The president was taken out of the plane, and nothing, silence.” An aircraft carrying Evo Morales was denied access to several countries’ airspace in Western Europe in 2013 after a US request, forcing it to land and refuel in Austria, where it was searched based on inaccurate intelligence that American whistleblower Edward Snowden was on board.

On Sunday, a flight operated by Irish carrier Ryanair flying from Greece to Lithuania was rerouted while in Belarusian airspace and instructed to land at an airport in the capital, Minsk. Air traffic controllers had warned the crew that there could be a bomb on board, claiming to have received a threat from Palestinian Islamist militant group Hamas. Once on the tarmac, security officers detained Roman Protasevich, the editor of a Telegram channel banned in the country for ‘extremism,’ as well as his girlfriend, Sofia Sapega, a Russian national. The incident sparked a furore in the EU, and saw Minsk accused of state-sponsored “piracy.”

Hamas has denied making the threat, and condemned Belarusian officials for linking the group to a potential terrorist attack. Lukashenko told reporters that he intended to show “some documents” to Putin during Friday’s meeting connected to the decision to order the passenger plane to land.

Belarus has been hit by long-running protests since Lukashenko declared victory in a presidential election last August. The opposition, and many international observers, say that the vote was rigged in favor of the veteran leader, and tens of thousands then took to the streets for long-running protests calling for a new poll. They were met with a heavy-handed police response that saw widespread arrests and violent clashes.