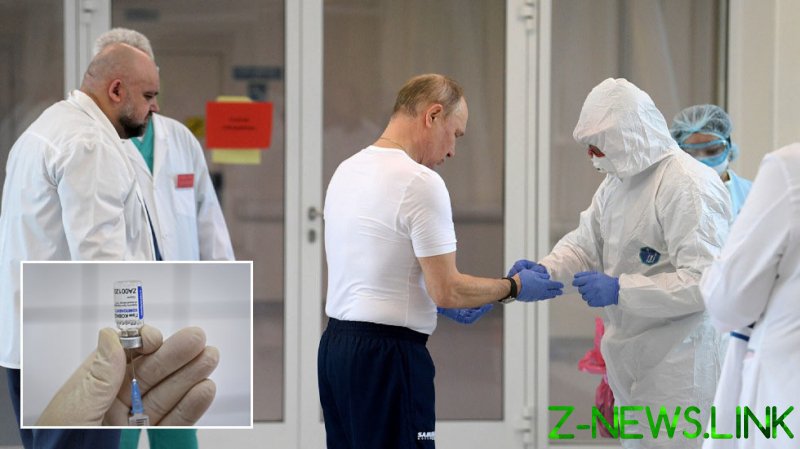 Speaking to the Rossiya 1 news channel, presidential spokesman Dmitry Peskov said Putin was poised to announce his intention to get the jab. “We can expect to hear from the president himself about the decision in the near future,” he said, adding that “he has actually previously said he would definitely take it.”

In a conversation with South Korean President Moon Jae-in earlier this year, Putin had already suggested he was keen to roll up his shirt sleeve. However, he has since insisted he would wait his turn for the vaccine, rather than skip the queue or enroll in an experimental trial.

Sputnik V, created by Moscow’s Gamaleya Institute, made headlines in August, when it became the first vaccine against Covid-19 to be registered anywhere in the world. There had been initial hesitancy about rolling it out to all age groups, and the very vulnerable, without extensive research, but with more than 700,000 Russians having received the jab already, and clinical trials completed, regulators now feel there is sufficient evidence to extend it to more and more people.

As a result, last week, the Russian Ministry of Health announced that people over the age of 60 would be able to sign up for appointments to receive the jab. Previously, only those working in certain sectors, such as education, healthcare, energy, and the media had been eligible, although, in practice, clinics were known to be more liberal in their distribution.

While Russia was the first state to register a Covid-19 vaccine, a number of countries have since begun their immunization program using other formulas. Over the past week, a row has been brewing in the US, after a number of right-wing Republican senators, many of whom had played down the pandemic, were among the first in line to get their shots. Outgoing Vice President Mike Pence and President-elect Joe Biden are among those who have been vaccinated already, joining world leaders such as Israeli Prime Minister Benjamin Netanyahu at the front of the line.