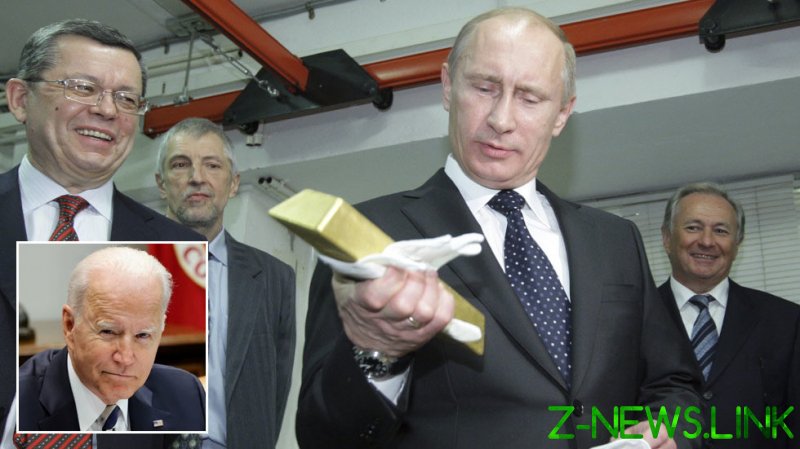 Most recently, the Democratic Party politician has renewed the New START treaty and ended American efforts to sabotage the Russian- and German-backed Nord Stream 2 pipeline, efforts which were kicked off by his predecessor. But, as if to make up for it, he seems to feel a need to bring out fiery and fear-mongering rhetoric at every opportunity.

So it was that during a visit to the office of the Director of National Intelligence on Tuesday, Biden talked up the threat posed by Russia, explaining its alleged aggressiveness as a product of its supposedly failing economy. Biden claimed that his counterpart, President Vladimir Putin, “has a real problem. He is sitting on top of an economy that has nuclear weapons and oil wealth and nothing else. Nothing else. Their economy is like the eighth … largest in the world. He knows he’s in real trouble – which makes him even more dangerous, in my opinion.”

It’s hardly a novel claim. In times long past, the Soviet Union was often called “Upper Volta with rockets,” evoking the name of the impoverished African state that went on to become Burkina Faso. More recently, Senator John McCain referred to the Russian Federation as a “gas station masquerading as a country.” And ex-US president Barack Obama said that Russia “doesn’t make anything.” “The Russians … are a smaller country,” added Obama, “their economy doesn’t produce anything that anybody wants to buy except oil and gas and arms.”

Underlying these statements is a perception that Russia is a poor country, and indeed, when compared to most of the Western world, it is, at least on paper. Even adjusting for purchasing power parity, Russian official Gross Domestic Product (GDP) per capita is around $28,000 a year. That of the United States is about $65,000. Americans’ sense of superiority has some basis in fact. Moscow has admittedly been quick off the blocks and, on Thursday announced that the country’s GDP had returned to pre-pandemic levels.

However, statistics aren’t everything. Russia, like most former Soviet states, has a sizable and thriving black and gray economy. Jobs are frequently advertised with one desirable perk being a so-called ‘white salary’ – one that is legally declared and taxed. Many aren’t, and employers frequently pay workers cash in hand, or for goods and supplies in undisclosed deals. This means that the true scale of the country’s economy is hard to measure. Though likely far larger than the official stats, the lack of accountability and reporting is often a problem in itself.

That said, one Swedish-backed study estimated the off-the-books share of the Russian economy at a whopping 45% in 2018. If true, and it seems like a believable figure, it would mean the financial reality is far more prosperous than the official numbers suggest, and would make Russia, by far, Europe’s largest real economy, in terms of purchasing parity. There are other interesting indicators in terms of consumption. For example,  the age profile of cars on Russian roads is more similar to that of Western Europe than Eastern Europe. Which is another hint that actual incomes may have more in common with, for example, Italy than, say, Romania.

As for Russia’s exports, these are indeed mostly natural resources – the top five exports by value being crude petroleum, refined petroleum, natural gas, coal, and wheat. By contrast, manufactured products top the list of Russia’s imports: cars, packaged medicaments, vehicle parts, broadcasting equipment, and planes and helicopters leading the way. Russia is a country that exports unfinished goods and imports finished ones.

Nevertheless, Biden’s dismissal of Russia is wrong. Russia has a full-service economy, in the sense that it produces nearly all of what it consumes. For instance, around 85% of all domestic appliances and 80% of all cars purchased in Russia are built there. Many of these are foreign designed and owned. All the same, Russia is making them.

The tense international situation has accelerated the drive towards domestic production by encouraging a policy of import substitution. In the agricultural sector, this has had a huge impact, greatly increasing output since 2014. The government has also been boosting the domestic pharmaceutical industry. As a result of a policy initiated in 2013, by 2017 over 80% of drugs sold in Russia were domestically produced, a sharp increase on the level five years previously.

In fact, Russia manufactures just about everything you could imagine – from space craft, through airplanes, cars, and computers, to boots and clothing. Russian-owned companies like Yandex, Kaspersky, and Telegram are leaders in the European IT sector. And the country also has a thriving service industry, which accounts for a whopping 60% of GDP and employs 63% of the working Russian population. By contrast oil and gas now accounts for only 15% of GDP.

Russia’s problem isn’t a lack of diversification; it’s that most of its products aren’t internationally competitive: Russians will buy them because they are cheaper than foreign imports, but others won’t. Millions of Russians own a Lada, for instance, but you won’t see many Americans driving one. In terms of innovation and quality, Russia lags behind its economic rivals.

Beyond that, the Russian economy has some serious structural problems. Above all, small and medium enterprises (SMEs) are underdeveloped, accounting for only about 20% of GDP.

One reason for this is the weak rule of law. SMEs find themselves subject to arbitrary pressure from regulatory authorities, a practice that Putin himself has complained about, as well as severe risks of being taken over by rivals who exploit connections with the police and judicial authorities to engage in what is known as “raiding.” Running a small business in Russia is a high-risk affair.

It’s also hard to get cheap credit. Ever fearful of inflation, the Russian Central Bank has long kept interest rates high by international standards (last week, it put them up again by a whole percentage point). SMEs either can’t get loans or have to pay a high price for them. By contrast, the state offers generous subsidies to politically-connected big businesses. This skews the economy in favor of the latter, even though they are often less efficient.

The Russian economy, therefore, is not without its problems. But they aren’t the problems that Biden and so many other critics imagine. And that raises an interesting question of why Biden, Obama, and others like them say the things they do. One imagines that Biden is not entirely unscripted. His latest comments came during a talk to the intelligence community. One would expect that there would be some intelligence input. If so, it suggests a shocking lack of knowledge of Russia within the US government. Cliché appears to win over thoughtful analysis.

There’s nothing wrong with saying that Russia is not as economically successful as America. Nor with saying that there are reasons to doubt its ability to catch up. But one should at least get the reasons right. The fact that the Americans can’t makes one wonder what else they don’t understand. One suspects it’s quite a lot.