Home / WORLD / Put ’em in the dock! France’s police raids on politicians over their criminal Covid-19 incompetence should be just the start

Put ’em in the dock! France’s police raids on politicians over their criminal Covid-19 incompetence should be just the start 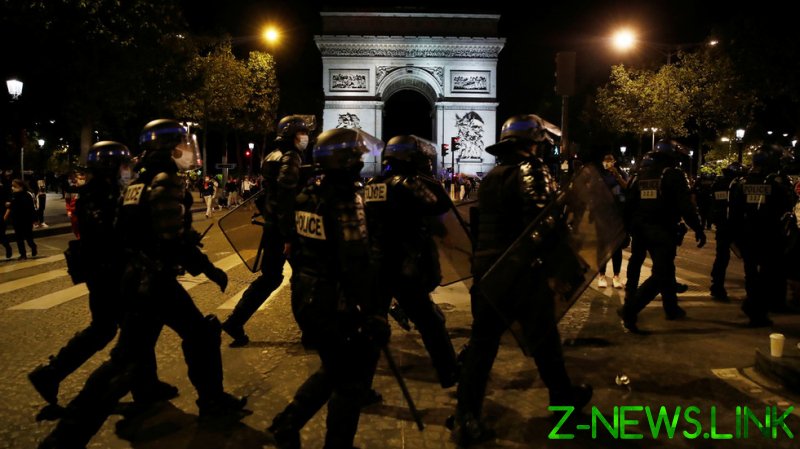 As French police investigate the government’s handling of the coronavirus pandemic and launch a series of raids on the homes of leading politicians and senior health officials, elsewhere around the globe Prime Ministers and Presidents should be starting to sweat. Because the people want payback.

Payback for the months of sacrifice they have made of their children’s education, their jobs, their personal freedoms and their mental health. Payback for their losses, of loved ones, of their futures, of hope.

And if that means the police kicking down a few doors and hauling shame-faced politicians and bureaucrats from their beds so that they might be pressed for answers, then so be it.

The upset in France is symptomatic of the worldwide fury at the incompetence shown by our leaders in tackling the coronavirus pandemic and we can only hope that this demand for accountability brings some answers.

Answers as to why 40 million cases of Covid-19 have been recorded in less than a year, why a million people have died so far, and why there is still no solution in sight. And why the so-called solutions to it – lockdowns, shuttering businesses, closing off hospitals to sick and dying patients who don’t have the disease – have not only failed to tackle it, but have made everything worse.

Lockdowns will cause more deaths than Covid ever will, thousands of businesses have crashed, and millions have been thrown out of work.

Have we had any explanation or any apology for all this self-inflicted wreckage? Of course not.  In place of answers and admissions that public health efforts have so far proved impotent or worse, we’ve been asked to swallow yet another catchy slogan or accept even harsher restrictions upon the limited personal liberties we are allowed to enjoy.

What has become clear, however, is that our leaders cannot simply keep turning the screw and expect everyone to just fall into line over the common good.

In Britain, the last day that worked was March 23 this year, when the national lockdown was imposed. Now, the UK’s regional leaders are no longer prepared to trash their own local economies by bowing to a central government demand that they enforce local lockdowns when it’s not happening elsewhere. There has already been talk of legal action against the Government, in a bid to avoid being placed in the highest tier of mandatory coronavirus restrictions, essentially Lockdown mark II.

Resistance has been building steadily elsewhere. It has led to mass protests in the US, Spain, Germany, Italy, Ireland, Kenya, Mexico, Israel, the Philippines, Argentina, Australia and just about anywhere else you can find on the globe.

With incompetence, delays and confused messaging the hallmarks of most governments in dealing with the coronavirus pandemic, no one would be surprised to see the police knocking on the doors of the homes and offices of politicians in any of these nations. Surprised? They’d be bloody delighted! It would be a much better use of police time than their fining people for breaking the rule of having just six people in one’s house, or raiding a gym that dares to try to keep people healthy.

Each country has its own horror stories of gross incompetence. While much of that stems from a failure to recognise the pandemic early enough and to do something about it, there is also a criminal neglect of emergency protocols, which have been universally ignored and stripped of funding by complacent governments everywhere.

This has meant not only a lack of interest in research and preparedness, but a deadly shortage of fundamental protective equipment that, surely, has cost lives of many of those working on the frontline across the globe.

Then there are the confusing quarantine rules, which seem to change daily, and the embarrassing squabbles and fortunes squandered over track and trace applications and their efficacy.

Whenever the citizenry manage to have a close look at the way their governments have dealt with these key issues, there will be no shortage of national outrage, public humiliation, legal action, and worse.

While the backlash began some months ago in China, where it followed its own proprietary way of dealing with those it holds responsible for public incompetence, France is choosing a more western-European approach to its investigation. The prime minister, Jean Castex, his predecessor Edouard Philippe, Health Minister Olivier Véran and the director of the national health agency, Jérôme Salomon, should be expected to squirm. Who knew what and when?

With President Emmanuel Macron last night announcing a four-week, 9pm to 6am curfew for Paris and eight other French cities from Saturday and PM Castex declaring a ban on all private festivities, including weddings, the people of La République are in no mood to be fobbed off.

The world is watching to see what price they exact for the incompetence of their leaders and the outrageous demands made upon their prized liberté. Heads may yet roll. Isn’t that old method of dealing with incompetent and wayward leaders, once so belolved of les citoyens, still lying somewhere in the basement of the Musée d’Orsay in Paris?