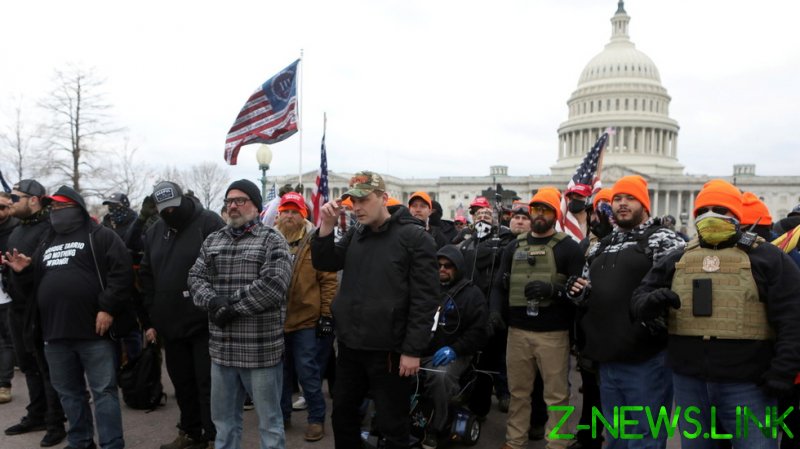 The charges were revealed in a superseding indictment unsealed on Friday, according to multiple reports.

Federal investigators continued their crackdown on those involved in the January 6 riot at the US Capitol and identified members of the Proud Boys as being chief instigators in the day’s events, which led to five deaths, including that of a police officer.

FBI agents arrested Charles Donohoe, a Proud Boys leader from North Carolina, and Zach Rehl, a chapter president from Philadelphia, this week, and two other high-ranking members in the organization (Ethan Nordean of Washington, and Joseph Biggs of Florida) were previously charged as part of the same alleged conspiracy.

Over a dozen members of the Proud Boys group have been arrested in connection with the Capitol riot.

Footage and images show Biggs and Nordean leading a crowd of approximately 100 through the streets of Washington and past police barricades. The indictment alleges those charged used military-style equipment and communicated through handheld radios and other devices to organize the large crowd.

Police have said Proud Boys members, many of whom are loyal and vocal Donald Trump supporters, were some of the first to begin storming the Capitol and begin shattering windows on January 6, the same day Congress had convened to count the Electoral College votes and confirm Biden’s presidential victory.

Shortly before the Capitol riot, Trump spoke to supporters at a rally where he continued to push his belief that the election was rigged in Biden’s favor, and he told the crowd to “fight like hell,” one of multiple comments Democrats have used to accuse the former president of inciting a riot. Their effort to impeach him for this alleged crime ultimately failed in the Senate after passing through the Democrat-dominated House.