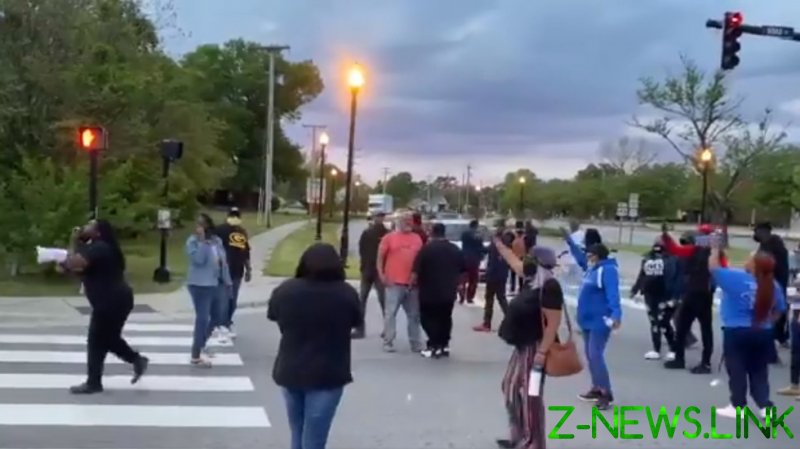 Pasquotank County Sheriff Tommy Wooten told reporters that a deputy opened fire on the subject of the warrant, Andrew Brown Jr., in a residential area of Elizabeth City early on Wednesday morning. Citing a pending probe by the state’s Bureau of Investigation, Wooten declined to elaborate further, including about how many shots were fired, though did note the officer was wearing an active body cam at the time and has been placed on leave.

Witnesses told the Associated Press that Brown, 42, was shot inside his car while attempting to drive away, and that multiple deputies fired shots. Brown’s vehicle ultimately hit a tree, Demetria Williams, who lives on the same street the shooting took place, told the AP.

“When they opened the door he was already dead. He was slumped over,” she said, adding that officers attempted to render aid to Brown.

The Bureau of Investigation will pass its findings to District Attorney R. Andrew Womble, who cautioned against a “rush to judgment” at Wednesday’s presser, saying “What we are looking for at this time will be accurate answers, and not fast answers.”

The shooting nonetheless stoked immediate public outcry, with protests erupting across Elizabeth City within hours of the incident. A sizable crowd gathered in front of the local City Council to demand officials address them, but were reportedly shut out of a closed-door meeting.

The president of a regional branch of the NAACP in North Carolina, Keith Rivers, was present for the City Hall protest, where he pleaded with the sheriff to “come out and talk to us.”

Crowds also gathered at the scene of the shooting and elsewhere in the city, with protesters seen marching down streets, in some cases blocking them, while hoisting signs and shouting slogans against police brutality.

The march carried on into the evening.

Brown’s relatives – including his grandmother, Lydia Brown, and his aunt, Clarissa Brown Gibson – told the AP they would demand a thorough investigation into the shooting,

“I am very upset. Andrew was a good person,” Lydia Brown said, adding that the officer “didn’t have to shoot him like that,” while Brown Gibson said “We want to know if he was served with a warrant, why the shooting over a warrant?”

Brown’s death comes less than a day after a fatal police shooting in Columbus, Ohio, where a 16-year-old African American girl was killed while attempting to lunge at a woman with a knife. It also closely follows a much-awaited verdict in another high-profile police brutality case, in which ex-Minneapolis cop Derek Chauvin killed suspect George Floyd in custody after pinning him to the ground with a knee to his neck for more than nine minutes. Chauvin was found guilty of second-degree unintentional murder, third-degree murder and second-degree manslaughter over Floyd’s death on Tuesday.