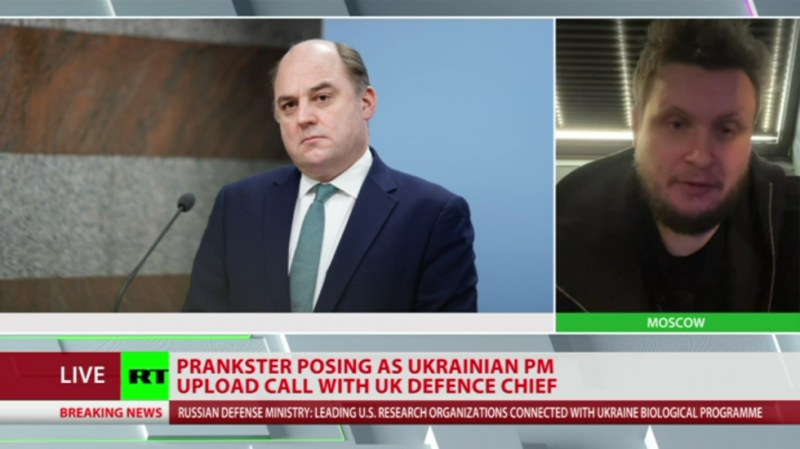 One of the Russian pranksters behind the call to UK Defence Secretary Ben Wallace, Alexey Stolyarov, AKA Lexus, dismissed London’s claim that the conversation was Russian propaganda. The team did not doctor the footage, only editing it with the sole purpose of keeping sensitive UK national security information from the public, Lexus told RT on Thursday.

Branding the interview as “Russian propaganda” was puzzling to the team, Stolyarov told RT. “We did not edit his words, his speech. So if it’s propaganda, then it’s propaganda of Secretary Wallace. It’s his words,” he said.

He confirmed that some parts of the original footage of the video call were kept from the public, but said the decision to withhold them was for the benefit of Britain. Wallace did not discuss British state secrets with the pranksters, but some of his words were “sensitive” with regard to national security, Stolyarov claimed, so he and Kuznetsov acted like “gentlemen” and did not publish those details.

He claimed the successful prank was the second time they have attempted to trick Wallace into talking to them. The first time was three years ago, when he was serving as minister of state for security and economic crime, but they couldn’t get through to him. This time they succeeded because the team used a contact in the Home Office which they also tricked into letting them interview Home Secretary Priti Patel, Stolyarov said.

The prankster said his friends in Britain were shocked that an official holding such a sensitive office as that of defence secretary could have been deceived by them. “If it’s easy to reach him by just private persons, you could imagine what could happen if some persons from intelligence try to reach him,” he said.

Stolyarov said his team was not particularly concerned about being on the British government’s bad side after deceiving Wallace. After all, he said, they did nothing criminal, as was the case with the many other pranks they pulled over the years on public figures from various countries.