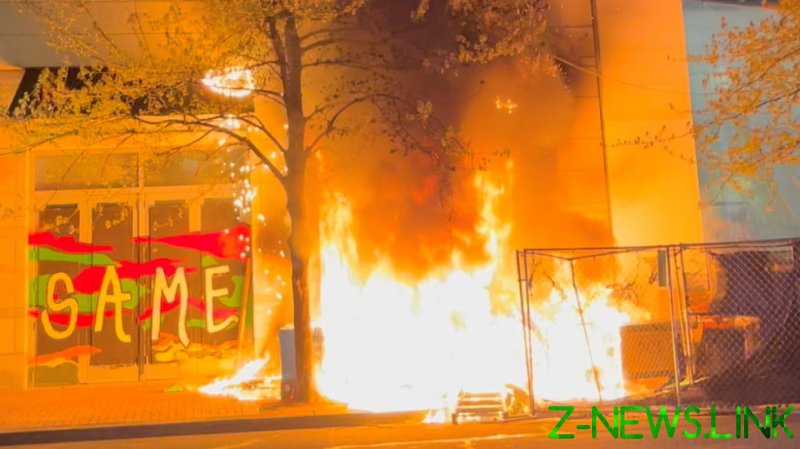 Another night, another riot. Protesters assembled on Friday afternoon in Lents Park, where police had shot a man dead hours earlier. The man, who local media identified as “white” to ward off any potential “social unrest,” was carrying a replica firearm when he was killed.

“Social unrest” soon broke out anyway. Black-clad ‘Antifa’ protesters smashed the windows of banks, restaurants and a church, and spray-painted “no more history” on the shattered windows of the Oregon Historical Society. An Apple store was torched, and burned for ten minutes before firefighters could get the blaze under control. No injuries were reported by police.

The vandals also lit fires in dumpsters and portable toilets, and police eventually declared the chaos a riot and broke it up.

Such scenes are commonplace in Portland. Last summer saw 100 straight nights of violence following the death of George Floyd in Minneapolis, Minnesota, with rioters in Portland focusing their anger on the city’s courthouse and other official buildings, although small businesses also suffered immensely.

The unrest continued sporadically through the winter and into spring, and Portland’s police union office was set on fire on Tuesday night, this time in response to the killing of Duante Wright in a botched arrest in Minneapolis.

Portland Mayor Ted Wheeler was criticized last year for not cracking down hard enough on the rioting, and for rebuffing then-president Donald Trump’s offer of federal help. However, he has since changed tack. Declaring that the public were “sick and tired” of the near-nightly chaos, he promised in February that the city would be “fighting back with everything we’ve got.”

Wheeler told a Police Commission meeting last week that investigations into the rioting were ongoing.