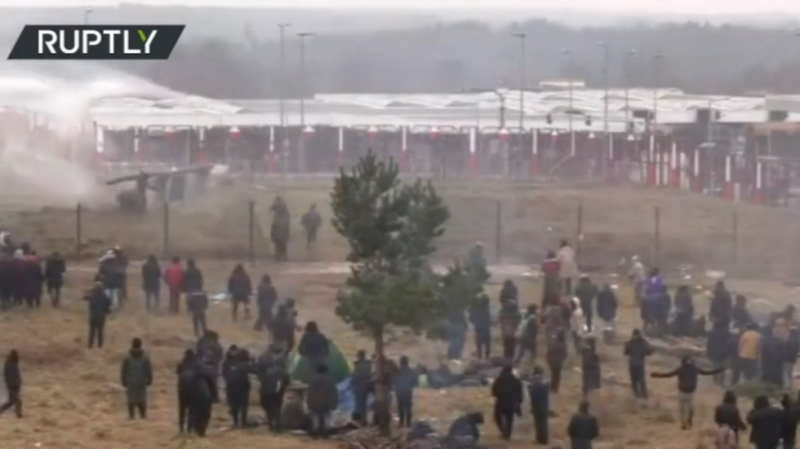 On Tuesday morning, footage shot from the scene showed dozens of men, some wielding sticks, approaching the demarcation line. Other clips showed a vehicle on the Polish side of the border shooting jets of water into the air, and what appeared to be clouds of smoke and light rising from projectiles fired by border troops.

RT correspondent Konstantin Pridybailo, who is covering the growing humanitarian crisis from Belarus, said that “the migrants had moved around 100 meters from the checkpoint, to a place where the barbed wire fence was broken.”

According to him, the response was “more an outburst of emotion – everyone was freezing, everyone was tired. Stones were thrown at the Polish law enforcement officers.” However, he added, despite the wire being damaged, none of the would-be asylum seekers climbed the barrier.

Tensions have escalated in recent days, with Poland and other EU nations accusing Belarus of engineering the sharp rise in attempts to cross the border as part of a campaign of “hybrid warfare.”

According to Brussels, large numbers of flights to Minsk have been put on from troubled nations like Iraq, Iran and Syria, with desperate people shipped to the shared frontier and prevented from turning back.

Warsaw has mobilized thousands of police, border guards and soldiers in recent days and declared a state of emergency amid a sharp spike in the number of people trying to cross into the EU from Belarus. Last week, its officers used pepper spray and riot shields to prevent groups from making it across.

Belarus has denied the charges, and insisted that it was simply no longer prepared to intervene and stop people seeking to cross the border with the EU in the context of the sanctions. Brussels is now reportedly considering a new package of measures designed to target Belarusian officials, as well as airlines alleged to be involved in bringing in refugees.

On Monday, two French journalists reporting on the crisis for RT were arrested by Polish police and brought before a court, accused of illegally entering its side of the border area.

Polish authorities have banned the press from covering the situation on the ground, instituting an effective media blackout, which has been widely criticized.

The two Frenchmen, correspondent David Khalifa and cameraman Jordi Demory, reported that they had been handcuffed by officers after “unfriendly” encounters with police close to the demarcation line.