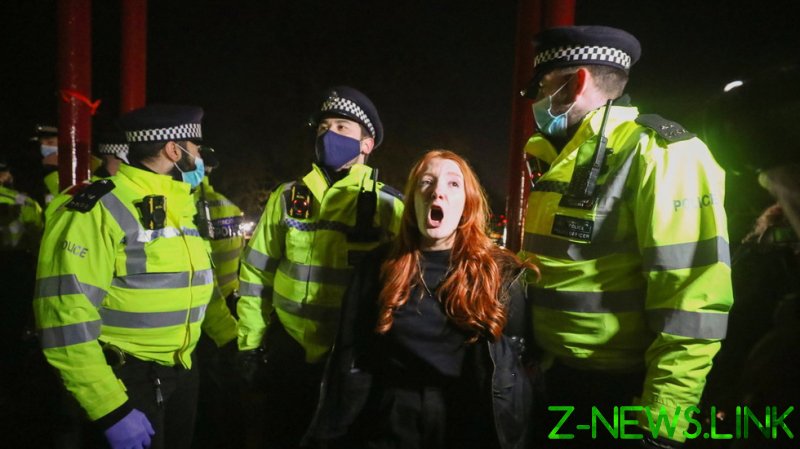 Several organizers of Saturday’s vigil at Clapham Common were reportedly arrested, and footage from the scene showed clashes with police. One clip posted on Twitter shows several women standing on the edge of a bandstand where police congregated, including one holding a sign that says, “We aren’t safe in our homes.” Four women are then grabbed from behind by officers, pulled back and arrested after several people in the crowd try unsuccessfully to pull them back.

One of those women was shown face down on the ground being handcuffed by police in a photo posted by actor and political activist Guillaume Rivaud. Talk show host George Galloway, a former member of Parliament, called the shot a “fatal photograph” for Metropolitan Police commissioner Cressida Dick.

Home Secretary Priti Patel said she has asked Metropolitan Police for a “full report” on what happened at the vigil, according to Sky News. One clip from the scene shows police being booed and shouted at by the crowd after they stepped onto the bandstand around 6:30 p.m.

The March 3 kidnapping and murder of Everard, allegedly by a London police constable, became a rallying cry over the dangers to women on UK streets. Green Party politician Baroness Jenny Jones went so far as to suggest imposing a 6 p.m. curfew on all men.

Police had ordered cancellation of the vigil, saying earlier Saturday that despite sharing the public’s outrage over Everard’s murder and rising concerns over violence against women, “we must all continue to work together to fight Covid-19 and keep each other safe.” Vigil organizers challenged the order in court, but the police decision was upheld.

Labour Party leader Keir Starmer called the scenes from Clapham Common “deeply disturbing” and said women should have been allowed to mourn for Everard peacefully. “I share their anger and upset at how this has been handled,” Starmer said on Twitter.

Australian journalist Rita Panahi said there were claims of “Antifa agitators” attending the vigil, and there were some “ACAB” signs seen in the crowd. But the “heavy-handed” response to the Clapham Common vigil showed a “two-tier policing” system, as officers “took a knee” when Black Lives Matter protesters rioted and tore down statues last summer, she said.

UK journalist Vincent McAviney called Saturday’s police response “bloody shocking and appalling” and said it was unlike the relatively “decent and fair” conduct he’d seen from Metropolitan Police at protests in London over the past decade.

Photos posted by Vice UK executive editor Zing Tsjeng showed the apparently calm scene around the bandstand before police made their show of force. Flowers and tributes were placed on one side of the bandstand in Everard’s honor.

Earlier in the day, Kate Middleton was photographed paying her respects, without wearing a mask, at the vigil. Police apparently refrained from throwing the Duchess of Cambridge on the ground and arresting her.