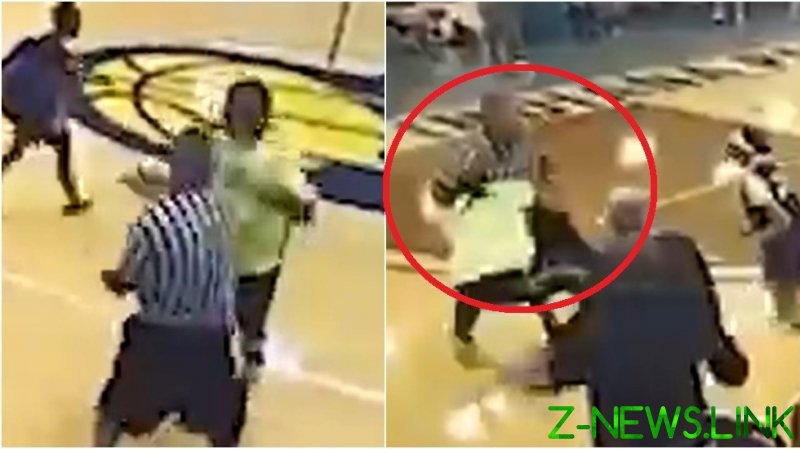 The heated confrontation took place at the recent youth game between Indiana Elite and Baylor Basketball at the Indianapolis suburb of Westfield, per the Indianapolis Star, when a Baylor coach disagreed with a call from the on-court official – before the coach began to exit the arena, with the Baylor players right behind her.

Things to a took towards the violent, though, when a spectator – possibly an enraged parent – stormed the court to confront the referee, filming the episode on their cellphone. The referee reacted to this challenge of his authority by slapping the spectator across the face, inciting a full-on brawl between the two as players from both teams raced on to the court.

The spectator then proceeded to lift the referee off his feet and slam him into the court, while a Baylor player repeatedly rained down blows on the injured official before other players and spectators broke up the fracas.

Evan Suttner, president of the Pacers Athletic Center where the brawl took place, issued a stinging rebuke of the scenes and announced that anyone found to be liable will not be invited back for future sporting events.

“The event staff removed the involved parties from the remainder of the tournament and will not welcome them back to future events,” he said.

“We are disappointed that this altercation happened, as we strive to provide a great experience for families.

“We take the safety of our staff, referees, players and spectators seriously… and there is no place for this kind of behavior in youth sports.”

Westfield Police have since confirmed in a brief statement that they are investigating the incident but declined to comment further when pushed by local media.

“This guy doesn’t need to be refereeing. He deserved what he got and hopefully he gets a lawsuit against him. You can’t just smack someone who is up in your face a little bit,” was the reaction of one commenter online, while another said that the official got what he deserved because “the ref swung first“.

“What an embarrassment to the sport,” said another. “Both the team and the ref. And the parents. Absolutely ridiculous.“

It remains to be seen what exactly prompted the furious exchange but according to the Parents Association for Youth Sports, more than 75% of parents have reported witnessing heated confrontations such as this at youth sports games in the United States, per the IndyStar.

“When your life revolves around the sport and competition, the stress and frustration can manifest itself in the player and parents,” said Lynn Jamieson, who added the pressure of seeking a collegiate scholarship can often lead to players – and more often parents – lashing out.