Home / Video news / Police have established a cordon between the stock “Demockery” and “Immortal regiment”. Video

Police have established a cordon between the stock “Demockery” and “Immortal regiment”. Video 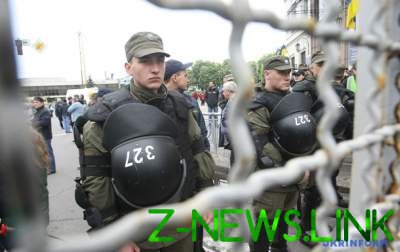 Law enforcement officers in Kyiv staged a live cordon between the two shares of the opposite ideology.

The police on Thursday, may 9, began a cordon between the protesters, organized by the Democratic sekirei, and March of the Immortal regiment.

Activists Democary with flags of the organization stand behind a fence not far from National transport University and chanting “Glory to nation, death to enemies,” and sing Ukrainian songs.

Before the fence there is a cordon of law enforcement officers – police, national guards and municipal guards. Near participants are about hundred militiamen.

The representative of Demockery Yuri Gudimenko noted that the activists “were not going to go to clashes and fights with the police.”