Home / Travel / “Plus-size”: in the Bahamas there was an unusual hotel

“Plus-size”: in the Bahamas there was an unusual hotel 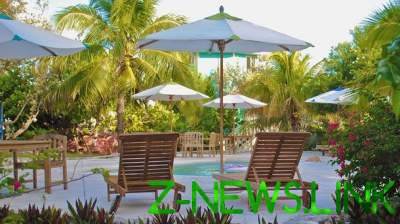 This hotel is designed especially for tourists with excess weight.

In the Bahamas found the hotel especially for tourists plus-size. It opened two years ago, but the press learned about its existence only now.

Hotel owner James king conceived the project 15 years ago when I started working in the tourism business. On his first day of work in the hotel he saw under the tourist overweight broke a sun lounger. According to king, the whole beach was laughing at the traveler, and brought her to tears. In addition, the hotel ordered her to pay $ 150 for a broken sun lounger. The king felt sorry for the woman, and he decided to someday open a hotel will be comfortable for everyone, regardless of their weight.

The hotel The Resort takes a maximum of 24 tourists at a time. For six nights, tourists will have to pay 16.4 thousand dollars (170.5 thousand UAH), meals included in the tour price.

Beds and sun beds at the hotel can withstand guests weighing up to 680 kilograms. James king manufactured them to order and tried to make them nothing looks no different from ordinary furniture.

However, most importantly, as noted by the owner a sense of emotional support that occurs. “But we have some of the men decided for the first time to go to the pool without a shirt, and women wear two-piece bikini” he said.

According to the owner, the hotel is a success. In the first year of operation constantly employed about 65 percent of the rooms, and the second – as much as 90. Guests without excessive weight is also allowed in the hotel.

James king has no plans to create a network of similar hotels. He would like to promote the idea of bodypositive in existing hotels.