‘Please God’: Support pours in for Eriksen as fans chant name in stadium after Denmark star collapses at Euro 2020 (VIDEO) 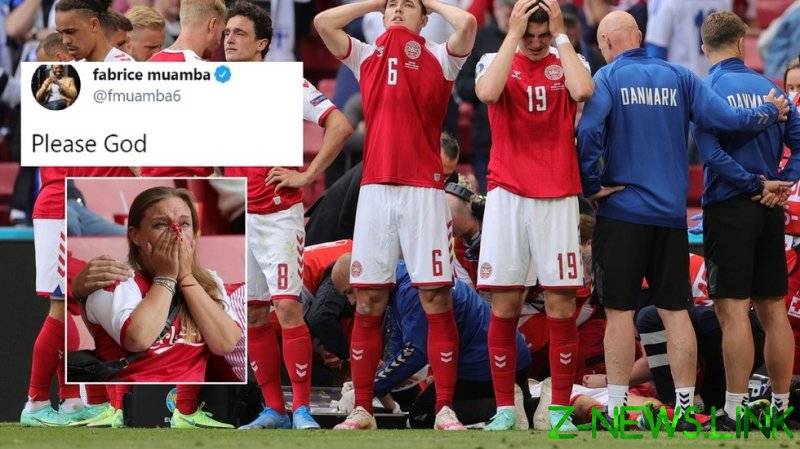 Play was halted before half-time in the Group B match – the opening game at the tournament for both teams – after the 29-year-old Inter Milan star fell to the turf as the ball moved towards him from a throw-in.

Concerned players immediately surrounded Eriksen as he received CPR before being taken away on a stretcher. He appeared to be conscious as he wore an oxygen mask while leaving the pitch.

“The player has been transferred to the hospital and has been stabilized,” an announcement from UEFA read.

As fans, players and staff watched on anxiously in Copenhagen, support was also pouring in for the former Tottenham Hotspur and Ajax star online.

Former Bolton Wanderers player Patrice Muamba, who suffered a cardiac arrest and collapsed on the pitch during an FA Cup tie in 2012, was among those to send his support.

“Please god,” wrote Muamba, who was forced to retire after his health scare.

Elsewhere, players and teams from far and wide offered their best wishes to Eriksen for a full recovery.

In moving scenes in Copenhagen, Danish and Finnish fans were heard chanting Eriksen’s name in a show of unity.

Others praised referee Anthony Taylor for stopping the match immediately and demanding urgent treatment for Eriksen.

It was later reported that Eriksen was stable and awake in hospital, raising hopes that he would make a full recovery – although fears inevitably turned to what this meant for the Inter Milan star’s football career.

It was later announced that the game, which was locked at 0-0, would be restarted at the request of the players, and the remaining four minutes of the first-half were completed before a five-minute break and the start of play for the second half.