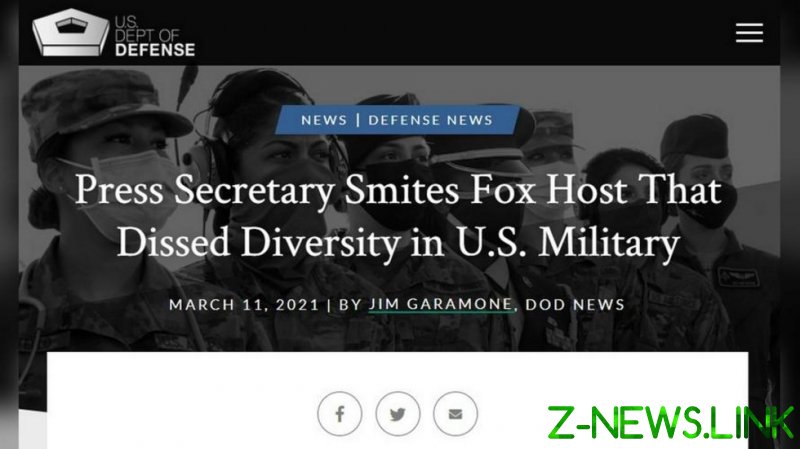 In a segment highlighting the potential threat of China’s military to the US, Carlson pointed to comments made by President Joe Biden about “updating” certain requirements like hairstyles to change the “culture and habits” that cause women to “leave the US military.”

“So we’ve got new hairstyles, maternity flight suits. Pregnant women are going to fight our wars,” Carlson then said as he showed an image of an Air Force officer wearing a still-in-development maternity flight suit. The military has changed its rules so women can fly non-combat aircraft into their second trimester of pregnancy.

“It’s a mockery of the US military,” Carlson said, noting the move towards a more “feminine” military in the US as opposed to a more masculine force in China.

Carlson’s comments quickly caught fire on Thursday, as critics accused him of disparaging women who serve.

The most surprising reaction, however, came from the Pentagon itself, which somehow found time to respond to Carlson.

“What we absolutely won’t do is take personnel advice from a talk show host or the Chinese military,” Pentagon spokesman John Kirby told reporters on Thursday.

Kirby added that he hopes Carlson realizes he made a “mistake” and expresses “some regret about the manner in which he essentially demeaned the entire US military and how we defend and how we serve this country.”

Kirby also said that Defense Secretary Lloyd Austin “shares the revulsion of so many others to what Mr. Carlson said.”

While many critics shared the Pentagon’s criticism with glee, others questioned why a “talk show host” would even be a priority for them.