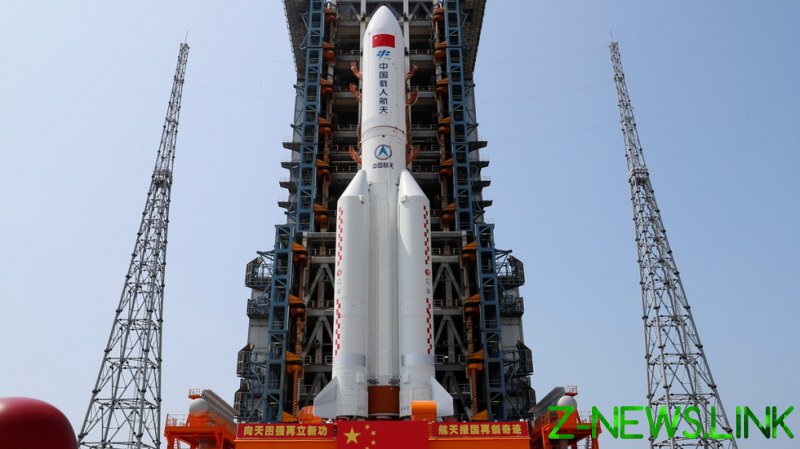 The 18th Space Control Squadron of the US Space Force will plot the Long March 5B rocket’s trajectory as it reenters the atmosphere, Pentagon spokesman Mike Howard said in a statement on Tuesday, noting that its exact path won’t be known for several days.

“US Space Command is aware of and tracking the location of the Chinese Long March 5B in space, but its exact entry point into the Earth’s atmosphere cannot be pinpointed until within hours of its reentry,” he said, suggesting that could come by May 8.

In the meantime, the spokesman said the squadron would provide daily updates on the rocket and its location through a special website.

The craft was sent into orbit late last month, embarking on an 18-month project to construct China’s first-ever space station. The successful April 30 launch put the station’s first module – dubbed Tianhe, or “Harmony of the Heavens” – into low Earth orbit, set to be joined by two smaller modules, Wentian (“Quest for the Heavens”) and Mengtian (“Dreaming of the Heavens”). While the 22-ton rocket stage detached from the Tianhe module as intended, it was unable to maneuver into a safe deorbiting path for a controlled reentry.

The uncertain trajectory of the rocket was reported within hours of the launch, though the Pentagon only acknowledged the matter on Tuesday, as did Russia’s space agency Roscosmos, which said it is tracking the rocket and expects the craft to return to Earth sometime around May 8. The EU’s Space Surveillance and Tracking network also said it is monitoring the situation.

While a number of corporate media outlets in the US reported the story in dire tones, with both Forbes and CNN warning of an “out-of-control Chinese rocket,” Harvard University astrophysicist Jonathan McDowell insists the craft is no cause for alarm, telling CNN it does not spell “the end of days.”

“I don’t think people should take precautions. The risk that there will be some damage or that it would hit someone is pretty small – not negligible, it could happen – but the risk that it will hit you is incredibly tiny. And so I would not lose one second of sleep over this on a personal threat basis,” he said.

Uncontrolled reentries aren’t entirely uncommon in space aviation, including for Beijing. Almost exactly one year ago to the day, another Long March 5B entered Earth’s atmosphere unguided, ultimately falling into the Atlantic Ocean. The large size of the Chinese rockets, however, does set them apart from other reentries.

Once completed, the new Chinese space station will become only the second currently in operation, alongside the International Space Station (ISS), a collaborative effort of the American, Russian, Japanese, European and Canadian space agencies. In April, Russia said it would withdraw from the ISS in 2025, and will instead focus on its own new space station project, ROSS. Before the ISS, Russia operated the first-ever modular space station, Mir, which was launched in 1986 and was decommissioned in 2001, breaking up above the South Pacific.