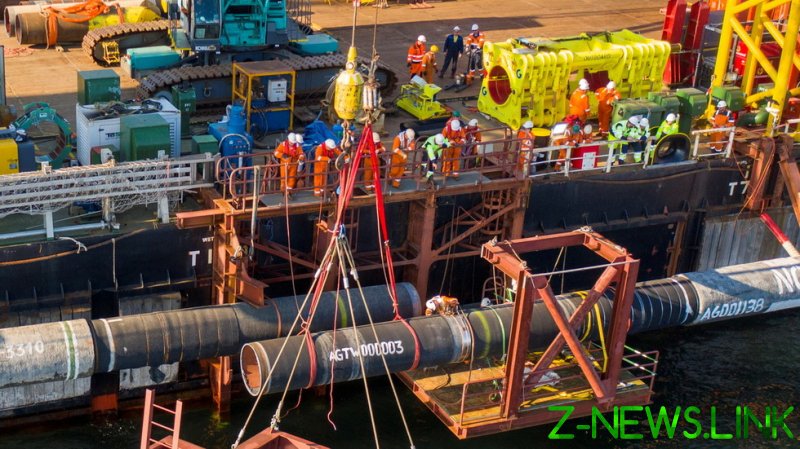 According to the pundits, consumers are set to pay more for household bills because of foul play from Moscow. Against the backdrop of Europe’s dependence on gas imports, Russia is said to be playing politics at the pumping stations and making energy supplies scarce.

Clearly this isn’t just about the economy, and politics is being mixed with business. But what kind of politics? The temptation to blame Moscow for a literal power manipulation could be down to a Kremlin campaign, or yet another example of Russia Rage. Pro-NATO lobby group the Atlantic Council, for one, presents an easy answer, decrying the supposed weaponization of gas supplies, giving no thought to any problems closer to home.

Cutting through the fog of allegations, there is no doubt the current prices are very high. In Germany, the gas price currently stands at around €65 per megawatt hour, representing a more than threefold increase since the beginning of the year. It is also much higher than the long-term average, which is somewhere between €15 and €20. What’s worse, many experts expect prices to keep rising, and not to fall again until at least next spring when warmer weather arrives.

This development will be felt by pretty much everyone in Europe’s largest economy. For companies, it almost inevitably plays an important role, either directly, where gas serves as fuel or production input, or indirectly by increasing the cost of electrical power. For private consumers, many regional providers have already raised their prices.

In the UK, the situation is even worse. There, with a similar, if even slightly steeper, price rise, other factors have intervened to make for a perfect storm. A wave of crashing start-ups in a liberalizing energy market; an especially high dependence on gas for heating among households and legal limits on what providers can recoup from the latter; and, last but not least, the self-inflicted consequences of Brexit that have already strained supply chains, production processes, and even basic food retail.

Clearly, talk of a crisis is no exaggeration. But the question again must be – who is to blame?

In a recent declaration, the International Energy Agency (IEA) set the scene with a “combination of a strong recovery in demand and tighter-than-expected supply,” “weather-related factors,” including a harsh last winter and a decreased “availability of wind energy in recent weeks.”

World market dynamics have played a role as well, transmitting impulses from Asia and America. Meanwhile the global supply of liquefied natural gas (LNG) “has been lower than expected due to a series of unplanned outages and delays across the globe and delayed maintenance from 2020.”

In short, Europe’s gas price crisis is driven by multiple factors. But the IEA’s list does not include Russian strategizing. In fact, the IEA confirms what sober observers admit, namely that “based on the available information, Russia is fulfilling its long-term contracts with European counterparts.”

That is not necessarily conclusive. What if the IEA’s omission of Russian foul play as a potential factor is the result of political caution? The same declaration also, after all, states the IEA’s belief “that Russia could do more to increase gas availability to Europe and ensure storage is filled to adequate levels in preparation for the coming winter heating season” and thereby “underscore its credentials as a reliable supplier to the European market.”

Is there a contradiction, then, between the fact that the IEA does not blame the price crisis on Russia and its admonition that Russia could help mitigate it? No, there isn’t. But we’ll come back to that. First, let’s have a look at those who, unlike the IEA, do blame Russia. Two examples, one from the media and one from politics will do.

For the media, an ‘analysis’ published a few days ago in Germany’s influential liberal weekly Die Zeit is a typical, but by no means the worst, example. For its author, “Russia’s transparent game with gas” is all about the now-finished Nord Stream 2 pipeline, awaiting approval from Berlin’s regulators before supplies start to flow.

Russia, the argument goes, would like to see the pipeline start operations as quickly as possible, with Kremlin spokesman Dmitry Peskov conveniently saying winter is bound to bring more demand for gas, and that using Nord Stream 2 would help serve it. We are reminded that Russia has not delivered enough gas to comfortably fill European reservoirs and that it is not clear for how much longer it intends to use Ukraine as an alternative pipeline route. Et voilà! The conclusion must be that the “fear” of a “dirty game” played by Russia “does not come out of nowhere.” Die Zeit then offers up the Atlantic Council’s conclusions as its own.

Yet, in reality, none of the above is evidence of Russia trying to deliberately starve Europe of gas. Once again, while European gas reservoirs are not as full as they could be, the fact remains that Gazprom has fulfilled its contractual obligations. Russia’s reluctance when it comes to Ukraine, especially since this is an ongoing negotiation, is plausible (even if you dislike it) and there’s no need to explain it away with a strategy of blackmailing Europe over Nord Stream 2. Finally, faulting Russia, in effect for, actually meaning to use the pipeline and Peskov for stating the obvious is simply comical.

What about politicians then? Unsurprisingly, among them, blaming Russia is not unpopular. For instance, 42 members of the European Parliament, representing various parties, have done so and demanded that the European Commission start an investigation.

They as well suspect a link with Nord Stream 2, and again, their entire argument is a speculative “cui bono.” Its essence: “Once we think a thing favors Russia, that is proof enough that Russia has a) brought it about deliberately and b) done so by dirty tricks.” No further evidence (or logic) required, because – Russia!

Yet a letter by a group is always a little bland, written by committee, as it were. For a clearer and more interesting example let’s look at Oliver Krischer, vice head of the Green faction in the German parliament. Krischer feels able to quantify the effect of Russian wickedness: at least half of the increased price, he somehow knows, “is the fault of Gazprom and [Russian President] Vladimir Putin.” He also laments that European reservoirs are not full enough and, of course, speculates that it’s all linked to Nord Stream 2. And yet again, not a shred of evidence beyond the conspiracy theory ‘logic’ that someone must be having a good time and therefore to blame.

So far, so unoriginal. Yet there is something especially telling about Krischer’s flavor of blame-the-Russians: He blames the Germans, too. Or rather, some Germans, namely Olaf Scholz, a leader of the Social-Democratic Party (SPD), minister of finance, and currently the most hopeful candidate for the top office of chancellor in the upcoming German elections. For Krischer, high gas prices are also Scholz’s fault, because he and the SPD are responsible for Nord Stream 2 (apart from Russia, of course).

Just as with Russia Rage, US-style, Krischer’s blame game already cuts two ways – at “the Russians” and, as it happens, at the political opponent at home, too. True, the German elections may well result in a coalition including the SPD and the Greens. But that is all the more reason not to stop sniping at the SPD as long as votes are still up for grabs.

What emerges is a picture in which those blaming Russia speculate without and even against the evidence, based on the fallacy of mistaking something that may benefit Russia for something that Russia must have caused deliberately and by foul means. This is, of course, not only the logic of conspiracy theory, but also of the Cold War: an all-encompassing distrust because the Other is the Other and as such simply must always be acting in bad faith. And if we cannot find any concrete evidence, then that’s just a sign of how smart they’ve been about hiding it…

Do us a favor?

But what about Russia? That brings us back to the IEA’s carefully balanced position: not blaming Russia but asking it to do more to help. That may or may not be realistic. A recent paper from the authoritative Oxford Institute for Energy Studies explains the real geographic, transport, and business (yes, Gazprom, too, has to balance the books) constraints on Russia’s ability to do so. Yet even if it can, there remains an obvious if inconvenient question: in a political climate dominated by accusations, sanctions, and confrontation – why should it?

In essence, those who demand that Moscow help are saying that it should do more than it is contractually obliged to do. Perhaps even at a disadvantage to itself or its other customers in Asia. Remember, Russia is also actually fulfilling those contractual obligations already.

In other words, they demand special forbearance or goodwill. Yet they do so without offering reciprocity: goodwill or forbearance have not been forthcoming from the EU toward Russia. And if you think Russia doesn’t merit such treatment, fine. But then don’t complain if Russia also thinks you don’t deserve special accommodation.