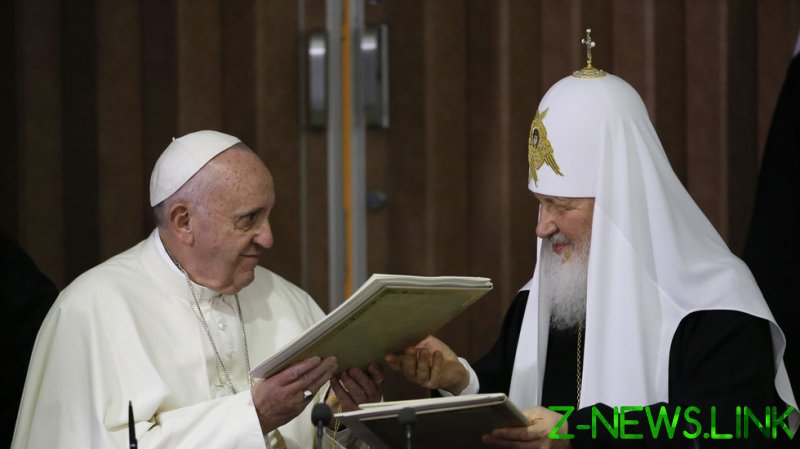 Patriarch Kirill of Moscow and Pope Francis stressed the “exceptional importance” of ongoing negotiations between Russia and Ukraine during their conversation on Wednesday.

According to a statement by the Russian Orthodox church’s Department for External Church Relations, the talks between the patriarch and the pontiff included “a detailed discussion of the situation on Ukrainian soil” with a special focus on the “humanitarian aspects of the current crisis” and on the Russian Orthodox and Roman Catholic churches’ efforts “to overcome its consequences.”

“The parties stressed the exceptional importance of the ongoing negotiation process, expressing their hope for the swift achievement of a fair peace,” the statement reads.

The Vatican has released its own readout of the video call, saying that both religious leaders agreed that “the Church must not use the language of politics, but the language of Jesus.”

Pope Francis added that as both him and his counterpart were “shepherds of the same Holy People who believe in God, in the Holy Trinity, in the Holy Mother of God,” they both had to “unite in the effort to aid peace, to help those who suffer, to seek ways of peace, and to stop the fire.”

Saying that “war is never the way,” the pope noted that “those who pay the price for war are the people; it is Russian soldiers and common people who are bombed and die.”

On Wednesday, during the General Audience, the pope read a special prayer “for an end to the war in Ukraine,” inviting Christians to “ask God for forgiveness and to grant peace.”

Earlier this month, the pontiff stressed that what was going on in Ukraine should be called a “war,” causing “death, destruction and misery,” rather than a “military operation.” Pope Francis, as well as many Western leaders, also called on Russian President Vladimir Putin “to stop this massacre.”

On Wednesday, Patriarch Kirill also discussed the situation in Ukraine with the Archbishop of Canterbury, the most senior bishop in the Church of England, Justin Welby.

During this conversation, Patriarch Kirill stressed that “every person should have the right to freely practice their faith and speak their native language, without being subjected to political persecution.”

“The parties stressed the need to achieve a lasting peace based on justice as soon as possible and agreed to continue cooperation,” the Moscow Patriarchate said.